Reanimation package of reforms > News > Statements > The Authorities Introduce Criminal Responsibility for the Participants of Anti-Corruption Rallies. We Call on the President to Prevent the Advent of Authoritarianism! 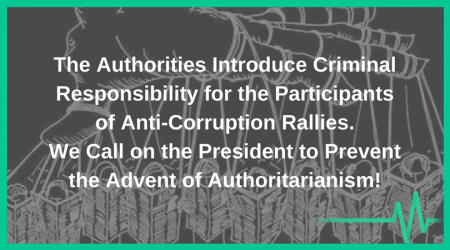 The Authorities Introduce Criminal Responsibility for the Participants of Anti-Corruption Rallies. We Call on the President to Prevent the Advent of Authoritarianism!

On March 23, 265 MPs of the Verkhovna Rada of Ukraine, in particular, members of the coalition factions (Petro Poroshenko Bloc and Narodnyi Front), Radical Party of Oleh Liashko, and the factions including mostly former members of Party of Regions (Opposition Bloc, Vidrodzhennia, and Volia Narodu) adopted the President’s draft law No. 6172 “On amendments to Article 3 of the Law of Ukraine “On corruption prevention” with the amendment proposed by Tetiana Chornovol, MP from Narodnyi Front, obligating each participant of an anti-corruption rally to submit an electronic asset declaration in the form established for civil servants, as well as introducing criminal liability for the failure to submit one.

Among the persons subject to electronic asset declaration the document mentions: “individuals who … take part or are engaged in the actions related to prevention of and counteraction to corruption.”

Moreover, the law obligates the members of the NGOs engaged in the prevention of and counteraction to corruption and their service providers to submit electronic declarations as well.

Although politicians might voice different arguments to explain the reasons behind this regulation, the adopted draft law opens up the opportunities of power abuse: the authorities can now pressurize the citizens who were brave enough to voice their stand and fight against corruption. We would like to stress that according to the public opinion polls it is corruption that remains a key barrier to the development of Ukraine.

It is a shame that in three years after the Revolution of Dignity, the authorities started to create barriers and significant restrictions for the public anti-corruption activities. And this is done by the politicians who came to power owing to the public rising against the willfulness and corruption of high-ranking officials.

Considering the fact that it was owing to the persistence and uncompromised stand of the public activists and organizations fighting against corruption that after the Revolution of Dignity new anti-corruption agencies –the NABU and the NACP – were set up, electronic declaration of civil servants, local officials and politicians was introduced, and the practice of officials’ recruitment on the basis of open competition was formalized, this decision is a revenge of the corrupt officials feeling a direct threat of a well-deserved punishment.

We do not evade declaration of our property and assets: each of us submits an annual tax declaration on property and income; some of us have published e-declarations in compliance with the effective laws or on their own initiative. Our organizations publish annual financial reports on our websites.

However, the essence of this law is different. Making “anti-corruption activists” equal to civil servants in terms of electronic declarations is only a populist cover-up hiding the legal mechanisms aimed at paralyzing the activity of the NGOs and preventing the citizens from taking part in any anti-corruption activities. Moreover, in its present form, this law includes evident signs of discrimination (unequal treatment) based on the type of activity.

The Reanimation Package of Reforms is a coalition of leading NGOs set up to implement the values of the Revolution of Dignity. Acknowledging a high-profile nature and the risks of this controversial and non-democratic decision, the Reanimation Package of Reforms calls on the President of Ukraine to return the law to the Verkhovna Rada of Ukraine for immediate repeated consideration, recommending that discriminatory regulations violating civil rights and threatening further democratic development of Ukraine are excluded.

We also propose that the President of Ukraine meets the representatives of the civil society in the presence of media to discuss this situation and to find the right way out, avoiding mistakes and uniting the society.