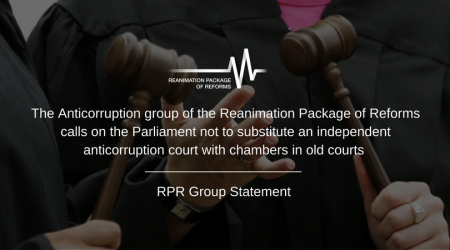 The Anticorruption group of the Reanimation Package of Reforms calls on the Parliament to reject the draft law No. 6529 as such that minimizes the possibility of establishing an independent anticorruption court.

The suggested approach to the judicial proceedings related to the corruption crimes as seen in the draft law No.6529 is unacceptable. The anticorruption chambers will be administratively and financially dependent on the unreformed courts, which are trusted only by 7% of the public. There is a considerable risk that important information might leak from the chambers through the general court secretariats. A lack of any additional criteria for the selection of anticorruption judges will let the judicial and political clans keep their influence on the recruitment process. Under such an approach, new anticorruption chambers will be similar to the ordinary courts which imprisoned only five corrupted officials in 2016, having considered none of the high-profile case.

The draft law is adverse to Ukraine’s commitments to the International Monetary Fund. According to the signed Memorandum, Ukraine shall not only set up an anticorruption court, but also introduce additional guarantees of fair recruitment of anticorruption judges, in particular, through the engagement of experts with international experience.

We would like to stress that ensuring transparent and independent recruitment of judges is the key requirement to the anticorruption courts. To this end, the recruitment panel shall engage the experts recommended by the international partners of Ukraine. This approach has been presented by the draft law No. 6011 “On the anticorruption court” which has been awaiting parliamentary consideration for four months already.

Therefore, we call on the Verkhovna Rada: