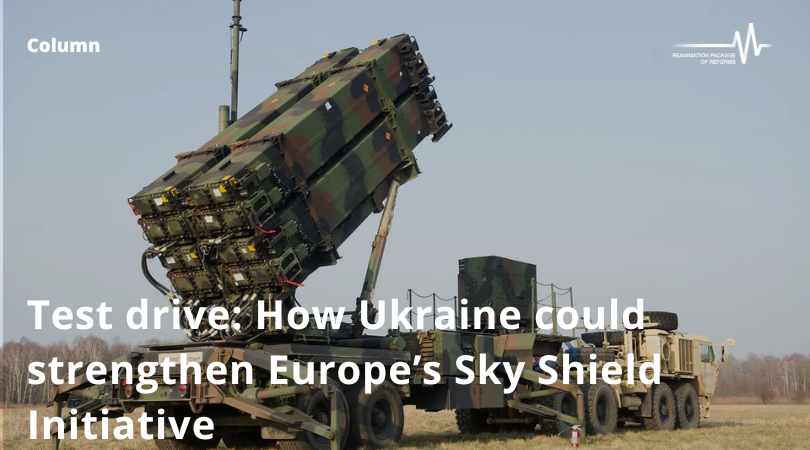 The Russian military’s recent missile and drone attacks on Ukraine have terrorised civilians, destroyed essential infrastructure, and caused mayhem deep behind Ukrainian lines. The renewed bombardment is yet another demonstration of Russia’s reliance on the use of missile strikes as a show of military might – even when it is failing on the battlefields below. This time, the Kremlin aims to divert attention from its losses in the Kherson region and reassure its domestic audience of the expediency of its military campaign. The propaganda value of these aerial attacks means Russia will likely continue to use them in the future, in Ukraine and perhaps beyond.

It is therefore significant that US General Mark Milley last week called on Ukraine’s allies to help the country build a comprehensive air and missile defence system. And just a day later, 14 NATO countries and Finland signed a letter of intent to develop the “European Sky Shield Initiative” – a joint project to protect the skies of the entire continent by integrating and coordinating the air and missile defence systems of its members and cooperating in their procurement.

Western deliveries of air and missile defence systems to Ukraine mean it will soon be able to better defend itself against the Kremlin’s ruthless tactics. The Sky Shield initiative, in turn, suggests Europe has observed Ukraine’s plight closely and is acting pre-emptively against potential threats to its own skies. But these dual processes of building comprehensive air defence capacity for Ukraine and for the rest of Europe should converge in the future, not least because Ukraine’s experience over the course of Russia’s war would be a valuable asset for its partners’ initiative.

What the Sky Shield brings to European defence

The European Sky Shield initiative is a German-led project and involves Finland, so it is not exclusively a NATO project. The German defence minister, Christine Lambrecht, recently underlined this point, stating that “we are open to everyone and we know from many countries that there is still a great deal of interest [in the initiative].” Moreover, the geographical coverage of the sky shield is not yet comprehensive. For example, France and Poland have not joined, while the United States will operate some ballistic missile sites in eastern Europe without becoming an official member of the project. Negotiations on membership are therefore likely to continue – with the aim of establishing as much cover as possible for Europe’s skies.

According to current plans, the Sky Shield will integrate three systems to defend against close- medium- and long-range air attacks: the German IRIS-T short-range air defence system, the US Patriot medium-range system, and the Israeli-US Arrow-3 long-range anti-ballistic missile defence system. However, negotiations over the list of systems are also ongoing. The US, for example, has not yet given consent for Israel to supply the Arrow-3. And, since Norway is a member of the initiative, its short- to medium-range NASAMS system (also co-produced with the US) may become a future contender.

Regardless of the specifics, the project will need to address the same challenge that Ukraine is facing now – how to integrate different air defence systems and coordinate their operation. Ukraine is currently a testing ground for that task. The Sky Shield states, however, will need to meet the additional challenge of coordinating national air and missile defence systems among themselves. Only then will Europe have robust protection against Russia’s most effective offensive tactic.

What the Sky Shield means for Ukraine

The initiative could have a positive impact on Ukraine’s anti-missile defence capabilities. After all, coordinating the production and purchase of anti-missile weapons is part of the plan. The participating countries will be able to optimise this process by making joint orders and negotiating the terms of the contracts together, while also adjusting distribution to the needs of each member. Germany, for example, will likely use this opportunity to step up the production of its IRIS-T systems. This would significantly increase Ukraine’s chances of being able to order additional IRIS-Ts in the near future to reinforce the units that Berlin has already supplied to Kyiv.

In the medium term, Ukraine should be able to join the European Sky Shield initiative – and in doing so, significantly strengthen it. The Ukrainian armed forces have both the necessary experience and equipment to make valuable contributions. Alongside the IRIS-T, for instance, Ukraine already uses the NASAMS system, which could play a key role in the project. Indeed, the Ukrainian forces are currently building an entire anti-missile defence system around modern Western weapons, meaning they will soon also have the technical capacity to become an equal player in the Sky Shield Initiative.

What Sky Shield countries can learn from Ukraine

Since its full-scale invasion on 24 February, Russia has fired almost 4,000 missiles of various types into Ukraine. No country in Europe has ever faced such massive missile strikes. This has provided the Ukrainian military with considerable experience in destroying these aerial targets.

In one recent attack, Ukraine shot down 43 of the 83 missiles Russia launched (52 per cent). Moreover, during a strike against Kyiv last week, the Ukrainian air defence managed to intercept all the rockets and drones aimed at the capital – likely with the help of IRIS-T. These successes are notable since Russia conducted its strikes simultaneously from the north, east, and south, which puts additional pressure on the coordination of missile interception. Over the last month, the Ukrainian armed forces have also shot down more than 220 Iranian-made Shahed-136 loitering munitions (small satellite-guided missiles). And soon, if US intelligence proves accurate, Ukraine will have learned how to destroy Iranian-made missiles.

Russia’s war in Ukraine is therefore a real-world test for modern Western anti-missile systems in high-intensity military conflict. This presents a unique opportunity for arms manufacturers to discover all the strengths and weaknesses of their products and subsequently create more advanced versions of their anti-missile systems. Europe can draw many valuable lessons from this Ukrainian ‘test drive’. Moreover, since the Sky Shield initiative is not exclusive to NATO countries, Ukraine can become an important future member – and contribute to defending the front line of European skies.