Reanimation package of reforms > News > Columns > Success Without Agreement: What Does the Lack of Results of the Minsk Negotiations Mean 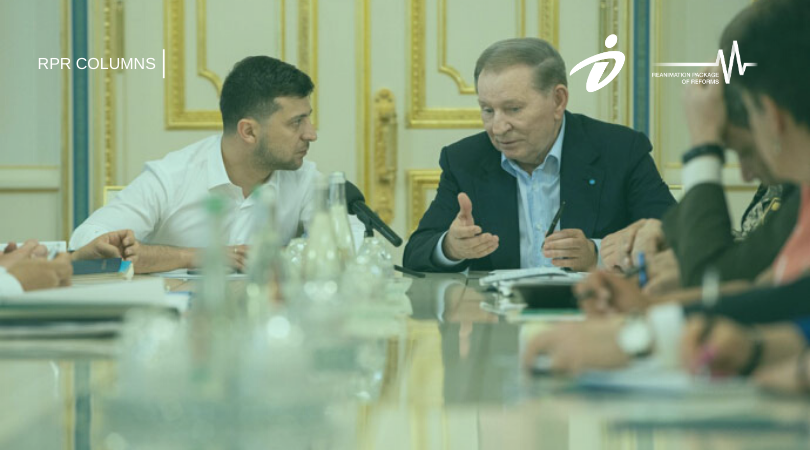 Success Without Agreement: What Does the Lack of Results of the Minsk Negotiations Mean

Special attention was paid to the negotiations of the Trilateral Contact Group (TCG) on Donbas settlement this week, and not for nothing. It was on March 25 that the decision to form the so-called Advisory Board of the TCG political group was formally signed. The one in which only the delegations of Ukraine and “ORDLO (separate districts of Donetsk and Luhansk regions) representatives” were to become the main negotiating parties for the first time and Russia turned into an observer.

And although there was no physical meeting in Minsk (given the epidemic the negotiations were carried out through a video conference), the danger was not removed – the Russian Federation had an idea how to legally approve a document, even if they were separated.

The negotiations proved to be gruelling. They lasted for three days, from 24 to 26 March.

And as a result, Moscow does not celebrate victory.

Despite Andriy Yermak’s personal signature under the TCG protocol of March 11, this week the Ukrainian delegation changed its position. Kyiv did not approve setting up an Advisory Council (AC) in a pre-agreed format.

Minsk TCG also failed to agree on any other issues on the agenda.

In fact, the meeting ended to no avail. However, this time lack of any result is important. Now in more detail.

Advisory Board: You can’t create one

Euro Integration has already analyzed why the proposed format and functionality of the AC are completely unacceptable. Public organizations, as well as members of the Servant of the People, including the head of the Ukrainian delegation to the PACE, Elizabeth Yasko, who published an analysis of the possible consequences of such a move, have been widely criticized.

Based on the results of the last TCG meeting, it can be stated that the arguments were heard.

Ukraine’s position has begun to change.

And that gives grounds for optimism.

Instead of officially setting up the AC, Ukrainian negotiators suggested that the Russians continue their consultations on the matter.

Such a turn did not satisfy Russia in any way.

If further consultations for Kyiv mean finding a more acceptable, comfortable format for such an advisory body, the AC formula agreed on March 11 is beneficial for Moscow. The one that leads Russia out of the negotiating parties, adds to the militants’ subjectivity and provides Moscow with arguments about the alleged “internal conflict” in Ukraine.

After the videoconference, TCG barely commented on its results (though as usual). But it is noteworthy that there is no mention in the short and dry announcement on the website of the Office of the President following the outcome of the TCG meeting of the Advisory Board!

Instead, the Russian media and the internet mouthpieces of pseudo-republics were full of comments from negotiators both from Russia and from pseudo-republics, who complained that Ukraine had supposedly radically changed its position on the Advisory Council until it completely abandoned its creation.

The truth is in the middle.

On March 25, the Ukrainian side did not declare its refusal to the AC and most likely will not do so – but it is evidently not ready to sign the project under consideration on March 11.

This seems to have been the result of shattering criticism of such an agreement with the Kremlin and internal pressure on the President’s Office. The inability to legitimize such a “compromise” and “sell” it to Ukrainian society forced the slowdown.

Answering in advance: no, this is not the end of the history of the KR and not the ultimate rejection of it.

But the fact that the position of the President’s Office managed to be influenced, at least in part, is a fact. It is hoped that the language of the arguments will continue to work. Especially in the next two weeks of preparation for the next Trilateral Contact Group meeting.

If there is no Council, there no exchange

Another eloquent “result” of TCG is the lack of progress on all other issues on the agenda.

Could not advance either the new exchange of illegally detained persons or the opening of additional checkpoints or with new deployment sites (here, however, there is nothing to miss – for the Ukrainian side, deployment is meaningless).

The lack of agreement is not a new matter for TCG.

But the current fiasco, unlike dozens of other unsuccessful Minsk meetings, has a specific reason: Ukraine’s position on the Advisory Council is changing.

This specific arrangement was the central element of the “package” agreed two weeks ago. Moreover, this package was not spontaneous, it has been developed for a lengthy period. That is why Moscow is sending a signal to Kyiv: without the AC, Russia will not be compliant with those issues that are important to Ukraine. In particular, the exchange.

This “package” was initially asymmetrical, as the Ukrainian side had almost not agreed to the non-beneficial long-term changes in the negotiating format, and Russia had pledged to do what was already (and remains) on the agenda; what is more, what Putin has already promised to do at the Paris summit.

Therefore, this package deal has become a trap. Unfortunately, Ukraine has swallowed the bait, and the final withdrawal from it will take a lot of effort.

What to expect from the negotiations in the future?

Clearly, the concept of creating the Advisory Council is not the only one Kyiv will have to fight against.

After the TCG meeting the “Draft Protocol” appears synchronously in the separatist media and on the websites of the so-called “Foreign Ministries” of both pseudo-republics which the leaders of the so-called “L/DPR” (read – Russia) allegedly submit to the Minsk TCG for approval. It is dated March 26 and reflects on the Kremlin’s failure in the first part of the March 24-25 meeting.

Of course, from the first to the last word it is a purely propagandistic document filled with accusations against Ukraine, and its real approval cannot be possible. However, there are some important “bits”.

The first one is that the separatists are claiming the cancellation of creation of the AC is related not only to Ukraine changing its position but also to that the French and the German representatives are reluctant to approve of TCGs decisions of March 11.

Can we talk about the position of partners in such a critical manner – the question is open.

But the fact that France and Germany were not the driving forces behind the March 11 project is true. Even though Bankova initially tried to justify the agreement by “partner pressure”. One of the key concerns of the French, and to a greater extent, of the Germans, is the risk of being involved in the work of a body whose formation and consequences will have little impact.

The second one is noteworthy as it is an attempt to legalise participants in illegal armed groups through the Joint Coordination and Control Center.

The JCCC is a bilateral Ukrainian-Russian format established in 2014 by officers of the Armed Forces of both countries. In 2017, the Russians officially withdrew from JCCC and do not plan to return there; since then, the only legal members of the Center are Ukrainian officers.

However, the L/DPR fighters have long begun to create a clone of the official JCCC.

In the occupied territory, without any right, local militants wear uniforms with JCCC on them, actively communicate with the OSCE SMM, and try to gain subjectivity in this way – despite outrage both in Ukraine and in the West. It seems that this tactic has taken a new breath: the above documents propose to establish a “direct link between (Ukraine and) ORDLO representatives in the JCCC”, although the latter simply cannot be there. All initiatives on silence or withdrawal of forces and troops also mention only Ukraine and ORDLO, not Russia as the other side of the agreement.

Establishing militants in the JCCC would be an even greater step towards legalizing pseudo-republics as a negotiating party than even the Advisory Council. The inclusion of militants in the official format of engagement with the Ukrainian Armed Forces is unacceptable. But there is no doubt that attempts to achieve these and similar decisions will continue in the future.

To sum up, we can say that this week’s TCG meeting Kyiv avoided a defeat that seemed quite real.

The Ukrainian negotiating team has not yet made a permanent loss in its negotiating positions, and the Russian idea of a “direct dialogue” with the territories it has occupied did not work.

Seemingly absent results of the Minsk negotiations this week are actually playing in Ukraine’s favour, though it will take a long time to eliminate the consequences of the mistake that Kyiv made on March 11.

So, this week’s Minsk news gives reason for restrained optimism, but not yet for celebrating victory. To be continued.