Reanimation package of reforms > News > Columns > Strike traction: ​​How the West can support a Ukrainian counter-offensive 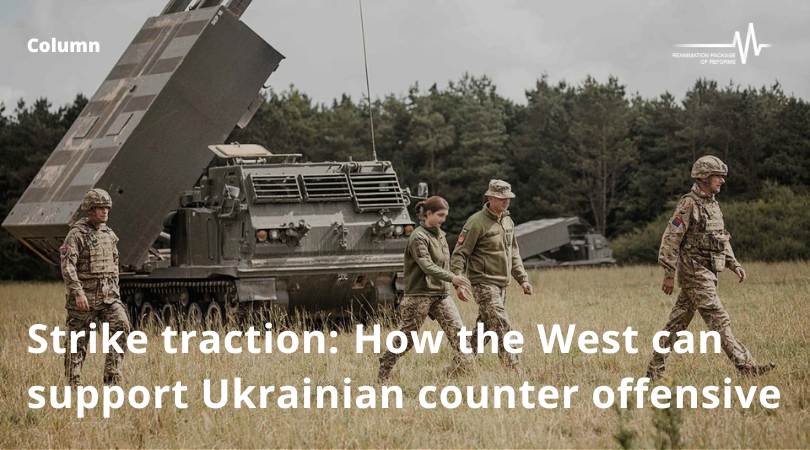 Strike traction: ​​How the West can support a Ukrainian counter-offensive

In recent weeks, Ukraine has created the conditions to begin a counter-offensive against Russian forces in several parts of the country. This is most apparent in the south, where the Ukrainian military has destroyed multiple Russian ammunition depots and heavily damaged the few paths across the Dnipro river that Russian troops on the west bank could use for reinforcement or retreat: the Daryivsky and Antonovsky bridges (which have become unusable for military equipment) and the crossing over the Kakhovka Hydroelectric Station dam. Indeed, Ukrainian Defence Minister Oleksii Reznikov recently stated that Ukrainian forces were preparing for operations to recapture southern Ukraine.

So, how did the Ukrainian armed forces gain such a strong position? The answer lies in two main factors: the supply of advanced Western weapons to the Ukrainian army and the gradual depletion of Russian forces’ capabilities for further offensives.

Western states started to supply Ukraine with some of their most advanced heavy weapons around a month ago. These systems include 155mm M777, Caesar, and PzH 2000 howitzers, as well as HIMARS multiple rocket launchers and the M270 Multiple Launch Rocket System (MLRS).

M777 howitzers have partially compensated for the Ukrainian army’s lack of large-calibre artillery. Previously, its most effective artillery pieces were 152mm guns. But, over time, Ukraine began to run out of shells for these weapons. And it was virtually impossible to replenish stocks of the shells, because Russia was their only producer. Therefore, the M777 has become the mainstay of Ukraine’s heavy artillery. This has provided the country with a qualitative advantage over Russia, whose main heavy artillery system is the far less accurate 152mm gun.

The self-propelled Caesar and PzH 2000 have performed well as counter-battery weapons – that is, systems the Ukrainian army has used to destroy significant quantities of Russian artillery. And artillery is crucial to Russian military tactics: all the territorial gains Russia made in recent months (mainly in Donbas) relied on massive salvos of artillery fire, which often lasted for hours before an infantry advance.

HIMARS strikes on Russian ammunition depots have made it even more difficult for Russia to employ these tactics. Since early July, the Ukrainian army has destroyed more than 30 such depots – likely with HIMARS in most cases. In response, Russian commanders are trying to move their stores of ammunition deeper into rear areas, beyond the 70km range of the HIMARS missiles Ukraine currently uses. This has markedly increased the time it takes Russia to transport ammunition to the front line.

The depletion of Russia’s military resources is reflected in the fact that it has been transferring units to Ukraine from as far away as the Kuril Islands. Moreover, Russia is not only employing mercenaries from supposedly private military companies but has also significantly lowered the requirements for new recruits – to accept people who were previously rejected for military service for ethical or mental health reasons – and begun to form so-called volunteer regiments in administrative and territorial units in Russia. Interestingly, the Kremlin even recently began recruiting “volunteers” from prisons to fight in its war on Ukraine.

All these efforts are part of a hidden mobilisation designed to address the Russian army’s acute shortages of personnel. In all likelihood, these shortages will soon lead to a decline in its offensive capabilities.

However, Ukraine will need more advanced heavy weapons if it is capitalise on this to conduct an effective large-scale counter-offensive. The West can help in two main ways.

Firstly, Ukraine requires more HIMARS and MLRS, along with missiles for these systems that have a range of 300km. Such support would facilitate strikes deep into territory held by Russian forces, further disrupting their logistics. Currently, Ukraine uses HIMARS mainly against ammunition depots and military headquarters as the highest priority targets. But, with a greater number of these systems, Ukrainian forces could destroy far more Russian military equipment such as air defence capabilities, Iskander and Tochka-U launchers, and clusters of armoured vehicles.

The US is already aiming to provide Ukraine with at least 25-30 more multiple launch rocket systems. Nonetheless, according to Reznikov, the Ukrainian army needs 100 units of HIMARS and MLRS collectively to conduct a successful counter-offensive.

Secondly, the West should supply Ukraine with new types of equipment and training. The most urgent step in this process is to begin training Ukrainian pilots to fly advanced Western fighter jets. Official talks on this subject are now under way in the United States. And, while it could take Ukrainian pilots at least six months to complete such training programmes, the war is unlikely to end any time soon.

Ukrainian officials have previously expressed hope that the West would supply Ukraine with F-15s and F-16s. The country needs these or other advanced Western aircraft – such as F-18s or Swedish Gripens – along with a full range of weapons for them, including air-to-air missiles, air-to-ground missiles, and guided bombs.

It is vital for Ukraine to be ready to launch a fully fledged counter-offensive when Russia exhausts the resources it needs to continue its offensives. Otherwise, the war is likely to become a temporarily frozen conflict: President Vladimir Putin has no intention of abandoning his mission to conquer all – or at least most – of Ukraine and replace the government in Kyiv with a pro-Russian one. This would only delay the next wave of all-out Russian aggression.

Western support is currently helping Ukrainian forces both put the Russian offensive on hold and launch a limited counter-offensive along the southern part of the front line. However, to push Russian troops out of all occupied territories, the Ukrainian military will require a substantial increase in the quantity of advanced Western weapons it receives. If the West does not supply these weapons, the counter-offensive might only have limited success.

Given that a doomed stalemate will benefit no one except the Kremlin, the West should now intensify its supply of advanced weapons to Ukraine. This is the only way to ensure that Russia loses much of its capacity for military aggression for years to come.