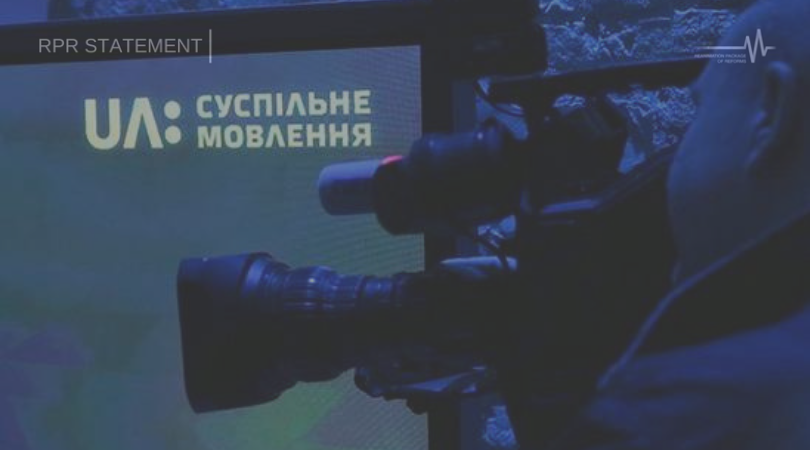 RPR coalition is concerned about the conflict between the governing bodies of the National Public Broadcasting Company that threatens the sustainable development of the public broadcaster.

Establishment of public broadcasting in Ukraine was one of the first RPR’s requirements back in 2014. We feel responsible not only for advocating the adoption of the law and amendments thereto, but also for the actual implementation of this reform. Since the establishment of the National Public Broadcasting Company of Ukraine (UA:PBC), the company has been subjected to pressure through critical underfunding, which has caused many millions of debts to service providers of signal distribution services. This directly affects the possibility of not only transforming, but also performing the main tasks of UA:PBC – creation of high-quality content for different social groups.

In this context, the supervisory board and the management board play a special role and bear a great responsibility. They must take all reasonable measures to establish public service broadcasting as an institution, create a program policy that will fill the void of high-quality informational and socio-political content in the Ukrainian television and radio space in accordance with the journalism standards. The supervisory board and the management board should defend the company’s independence from political influences and advocate strengthening the financial guarantees of the public broadcaster.

Accountability of the supervisory board and the management board is part of the accountability of the public broadcaster itself. Existence of different constructive visions between the management board and the supervisory board serve as the basis for healthy discussion and decision-making. However, this does not have to turn into personal score-settling.

RPR calls on the UA:PBC supervisory board and management board to increase transparency and informing regarding their activities to prevent possible speculation and form a sustainable culture of good governance. In addition, information about any external funding raised by UA:PBC should be disclosed on the same basis as funding from the state budget.

Creation of public broadcasting requires experience in managing independent institutions that are not inherent in a bureaucratized government system. Lack of experience can lead to the adoption of false decisions that require analysis and prompt correction. Management team as the basis of Public Broadcasting in Kyiv and regions should continue to work on the implementation of the company’s mission, especially during the election period.

RPR emphasizes that the public service broadcasting reform is in jeopardy. We call on all UA:PBC management bodies to be more reasonable and seek solutions that will allow continution of establishing public service broadcasting as a sustainable institution. Society risks losing a system that is able to provide citizens with high-quality unbiased news and socio-political, educational content, and will set the benchmark for non-manipulating discussions and show the reality as it is.

RPR stresses that the systematic lack of funding by the government and parliament of an extensive system of national and regional television and radio channels, and the simultaneous blaming of “lack of change” is simplification and manipulation. Ukraine risks returning to the practices inherent in former state broadcasting, in particular in the form of traditional, complimenting 20-minute speeches demanded from UA:PBC by MPs over the past two years. The task of UA:PBC is to provide citizens with impartial and balanced information. The task of politicians is to learn a new culture of communication with voters and how to sustainably defend their positions especially in a form of discussions and debates. It is in the interest off all political forces and society in general to ensure independence and sustainability of public service broadcasting.