Reanimation package of reforms > News > Columns > Send in the Leopards: Why Western allies should deliver tanks to Ukraine 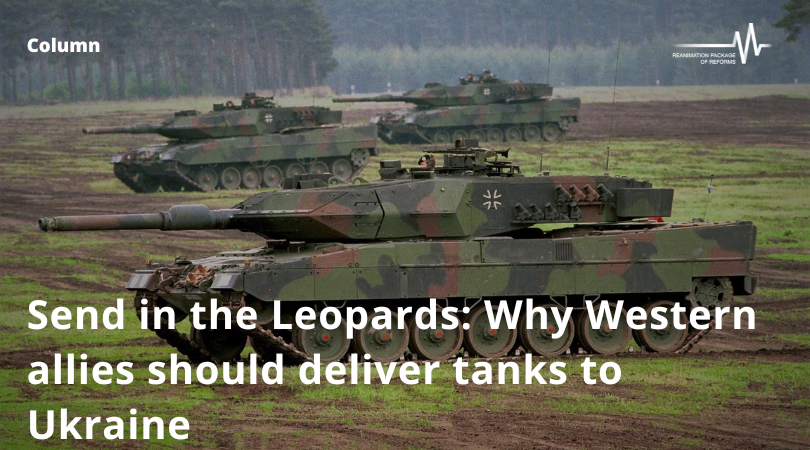 Send in the Leopards: Why Western allies should deliver tanks to Ukraine

After several countries committed to delivering heavy weapons to Ukraine, all eyes are on Germany and the US, and whether they will agree to send Leopard 2 and M1 Abrams tanks to Ukraine

After months of reluctance, Western allies have announced that they will deliver modern heavy weapons to the Ukrainian armed forces, including Bradley and Marder infantry fighting vehicles, Challenger 2 battle tanks, and CV-90 armoured vehicles. Now the limelight is on the German Leopard 2 battle tank and the American M1 Abrams, and whether Western allies are prepared to supply them to the Ukrainian army. Pressure is mounting on Germany and the United States to allow the delivery of the tanks, which could change the dynamics on the battlefield.

The head of the Ukrainian armed forces, General Valery Zaluzhny, has said that the Ukrainian army needs 300 tanks from its Western allies in order to launch a successful counter-offensive and to push the Russian army back to where it was on 23 February 2022. Finland and Poland have declared that they are willing to send Leopard 2 tanks to the Ukrainian front-lines, and other countries may follow suit, but as the producer of the Leopard 2, Germany must first allow its re-export. The presidents of the European Commission and European Council, Ursula von der Leyen and Charles Michel, have called for Germany to allow Leopard 2 tanks to be transferred to Ukraine as quickly as possible. But German officials seem reluctant to approve such a decision, waiting for the US to agree to send their M1 Abrams tanks first.

Western allies easily have the capabilities to meet Zaluzhny’s request for 300 tanks. M1 Abrams and Leopard 2 tanks are the most common Western battle tanks, and allies have a significant number of them in their stockpiles. Between them, the US and European countries possess more than 8000 M1 and M1A1 Abrams tanks and 2000 Leopard 2s. Most Leopard 2 tanks are in service in Germany (321 plus over 200 in storage), Greece (353), Spain (327), Turkey (316), Poland (247), and Finland (100 plus 100 in storage), while the US possesses the majority of the M1 Abrams tanks. Three hundred tanks amount to just over 3 per cent of US and European NATO members’ supplies of these models alone. Given how prolific these tanks are, they should and probably will become the basis of further support for Ukraine.

Some countries fear that supplying Ukraine with tanks would be crossing a ‘red line’ that may provoke further escalation by Russia. However, Western allies have already sent hundreds of tanks to Ukraine. For example, Poland alone has supplied the Ukrainian armed forces with 260 T-72 tanks of various versions. This did not lead to escalation by Russia or draw Poland directly into the war. The Russian army regularly increases the intensity of its offensive, and its decisions to do so are not linked to the West providing Ukraine with new weapons. Moscow will continue to ramp up its mobilisation efforts and increase the size of its army regardless of whether Ukraine receives the modern battle tanks. If Germany is concerned that Russia will claim it is party to the war if it sends its tanks to Ukraine, it should not stop other NATO members who do not share these fears from deploying their units. It seems unlikely that the tanks would provoke Russia, but they would give Ukraine a chance to withstand the growing pressure on its front-lines.

The Leopard 2 tanks should be the main priority for several reasons. Firstly, Ukrainian soldiers would need less training to use the Leopard 2 than the M1 Abrams. Secondly, the jet engines of the M1 Abrams require much more propellant than the Leopard 2 does, so the Ukrainian armed forces and its allies would need to improve fuel delivery logistics to keep the M1 Abrams tanks running. European countries also have better logistics and technical capabilities for repairing and servicing Leopard 2 battle tanks, meaning they could more easily and quickly repair damaged tanks and return them to the front-lines. Furthermore, several countries are ready to deliver their Leopard 2 tanks to Ukraine as soon as Germany gives permission, while the US willingness to send the M1 Abrams is less clear. Finally, the delivery of Leopard 2 tanks to Ukraine may encourage the US to start delivering M1 Abrams, signalling to Washington that European allies are prepared to be more active in supplying Ukraine with weapons and that the Ukrainian armed forces can efficiently use such expensive modern offensive heavy weapons. This would be significant, as with over 8000 M1 Abrams tanks, the US could provide a steady supply of tanks to Ukraine.

Western allies can supply enough modern battle tanks for the Ukrainian armed forces to launch a successful counter-offensive. But they need to act quickly: training Ukrainian soldiers to use Leopard 2s will take at least one month – and even longer for the M1 Abrams. If the decision to deliver the tanks is made in the next few weeks, Ukraine could begin a significant counter-offensive in spring. Meanwhile, Russia is using the current pause from offensive operations to re-equip its forces with both weapons and newly mobilised soldiers. There is a high chance that Moscow will renew its offensive in the coming months. Ukraine needs to be ready to withstand this pressure and launch new counter-offensive operations. Modern battle tanks would allow them to do so and could profoundly change the course of the war.