Reanimation package of reforms > News > Columns > Sanctions against Russia. How does the Russian economy feel? 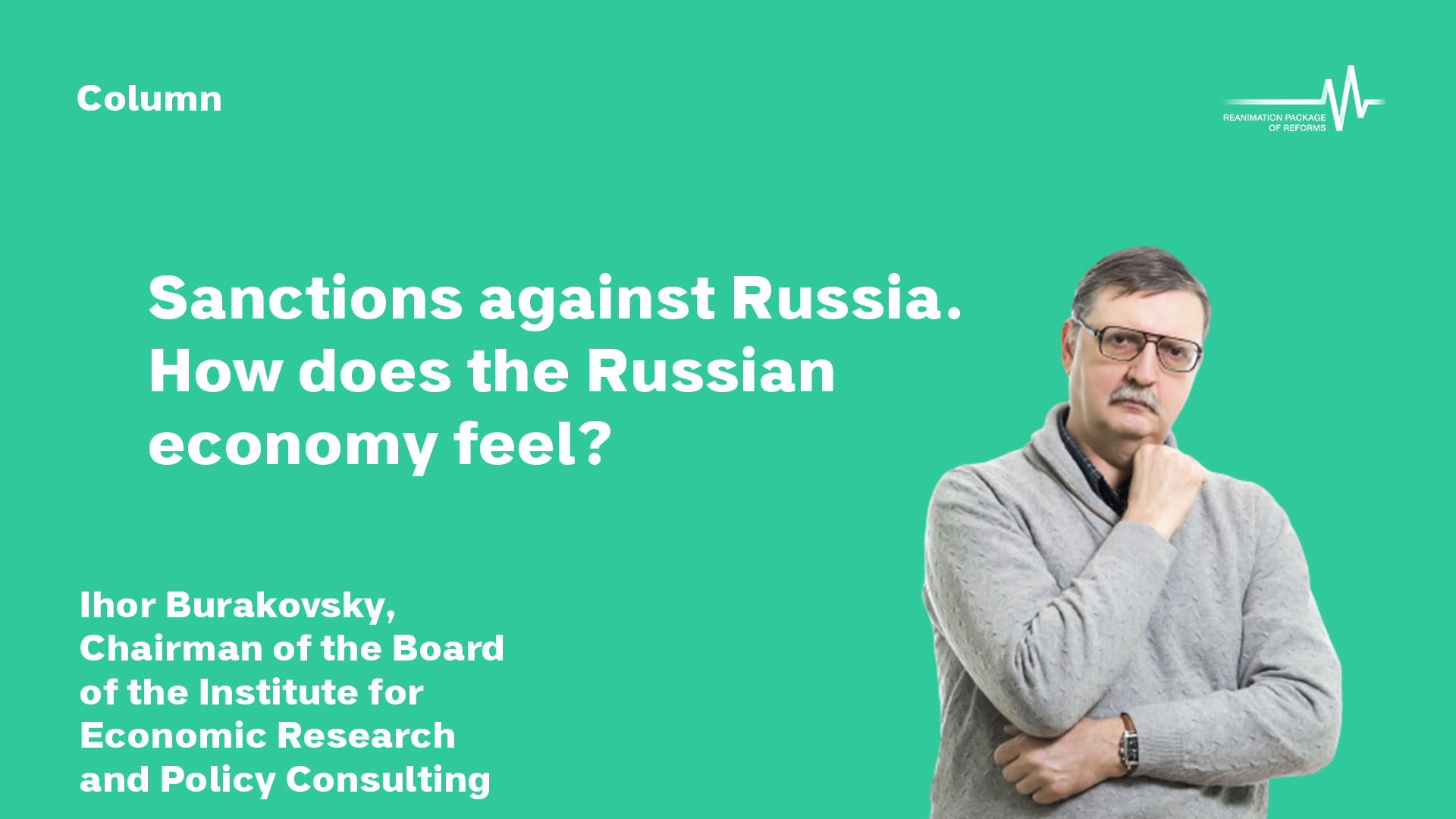 Sanctions against Russia. How does the Russian economy feel?

Today, there are differing opinions among political and economic experts on assessing the effectiveness of economic sanctions as a policy tool. Some consider them ineffective; others, on the contrary, say that economic sanctions are quite effective if applied correctly. The economic nature of sanctions and their potential are described in detail in the previous text,” Sanctions against Russia.  Q&A for Ukraine “now is the time to dwell on their effectiveness.

According to the Russian Analytical Credit Rating Agency (ACRA), in 2018, the sanctions somehow affected 20-21% of Russia’s GDP. Restrictions affected large state-owned banks  (54% of the banking system’s assets), oil and gas companies (which account for 95% of oil and gas revenues) and virtually all enterprises in the military-industrial complex.

ACRA believes that the sanctions have had a weak effect on the financial condition of companies and banks. At the same time, sanctions could have a negative impact on economic growth in the long run. At the same time, it is noted that the policy of Russian counter-sanctions has led to rising prices and declining incomes by 2-3% during 2014-2018. These losses were not offset by increased production in agriculture.

According to Bloomberg, the difference between the actual and potential results of economic development from 2014 to the end of 2017 was 10%. At the same time, losses from sanctions could potentially amount to about 6% of these 10 percent losses.

According to Anders Åslund and Maria Snegova, Russia’s foreign debt has decreased from $ 729 billion. US as of the end of 2013 to 470 billion as of the end of 2020. Thus, on the one hand, we have a debt reduction of $ 259 billion, but on the other – we can talk about the loss of investment funds. If Russia were to follow the trend of attracting capital from emerging market economies, without sanctions it could receive about $ 479 billion as additional financial resources. The same researchers draw attention to the fact that during 2010-2013, investment in fixed assets after the global financial crisis grew by an average of 6.2% per year. However, during 2014–2020, ie the period of sanctions, they decreased by 0.5% annually.

Obviously, for the sake of completeness, the analysis should also adequately assess Russia’s ability to minimize the impact of sanctions on its economy and other economic and political factors. Given these circumstances, today, almost all experts believe that, in general, when assessing the aggregate effect of economic sanctions, the following points should be taken into account. At the same time, I would like to note that the imposed economic sanctions were not aimed at destroying the Russian economy.

First, the scale, depth and management of sanctions so far in terms of their potential are clearly insufficient compared to expectations. We are talking about the choice of sanctions (individuals, companies, areas), the existence of various exceptions, and opportunities to circumvent the restrictions in one way or another.

Secondly, the Russian economy has been able to adapt to sanctions to some extent. This was facilitated by a significant increase in world prices for oil (January 2016 – October 2018, April 2020 – 2022) and natural gas, which, in particular, stimulated the extraction of these resources. On the other hand, restrictions on the supply of certain goods to Russia and the introduction of counter-sanctions by Russia stimulated the development of certain import substitution processes (in the agro-industrial sector in particular), although today full import substitution is almost impossible.

Third, to minimize the impact of sanctions on the banking system in particular, the Central Bank of Russia has changed the rules and regulations for the formation of reserves, accounting for certain securities, reporting, providing banks with foreign liquidity and more. In addition, the Russian government has also taken some steps to optimize budget expenditures and so on.

Fourth, to minimize the impact of sanctions, Russian business is looking for and finding certain opportunities to circumvent the existing restrictions in one way or another. At the same time, it should be noted that in recent years, despite the threat of tightening Western sanctions, the scale of withdrawals from Russia has increased significantly.

Well, now to the conclusions. Sanctions have a negative impact on the Russian economy, although their negative effects are assessed differently.

I share the opinion of those experts who believe that at the current level of economic sanctions, Russia’s economy can function, but the prospects for dynamic long-term economic growth are very, very doubtful. The effect of sanctions depends on the situation on world markets, in which Russia is represented in one way or another. Thus, sanctions and unfavorable world economic conditions in 2014-2016 came as a shock to the Russian economy, while later changes in world markets favorable for Russia to some extent offset the negative effect of sanctions, as discussed above.

Despite numerous statements about the resilience of the Russian economy, economic sanctions have become an important factor in economic policy today. Thus, the head of the Central Bank of the Russian Federation Elvira Nabiullina stated in particular:  .B .). And our main priority in the presence of such risk is to have all the buffers, all the tools to… be able to act  in order to maintain financial and price stability. The document “Main directions of fiscal, tax and customs tariff policy for 2022 and for the planning period of 2023 and 2024” among the list of risks there are “geopolitical threats and related changes in the structure of international trade,  including due to” sanction” policies pursued by individual countries. ”

If you choose between sanctions and war, economic sanctions certainly have an advantage. At the same time, sanctions have a price for those who impose them. Therefore, as modern history shows, the political and business elite of the country – the initiator of sanctions is always faced with the problem of choosing between political and value considerations and economic benefits. In fact, it is a specific form of  global corporate social responsibility  at a time when fundamental principles of international law and international security are being violated.

Well, this is my traditional conclusion-call: despite the widespread use of economic sanctions and the recognition of their negative impact, economic assessments of their impact in general and on the Russian economy in particular remain quite contradictory. Therefore, I urge my colleagues in the expert department to actively and impartially analyze the economic consequences of sanctions for Russia and Ukraine. Well, both government and the National Security and Defense Council must be a leader in organizing such intellectual work.

And I want to end the article with a quote from the 26th President of the United States, Theodore Roosevelt: “Do not fight at all, if this can be avoided, but If you’ve got to fight, fight hard and well.”

Ihor Burakovsky, Chairman of the Board of the Institute for Economic Research and Policy Consulting, for ZN.UA