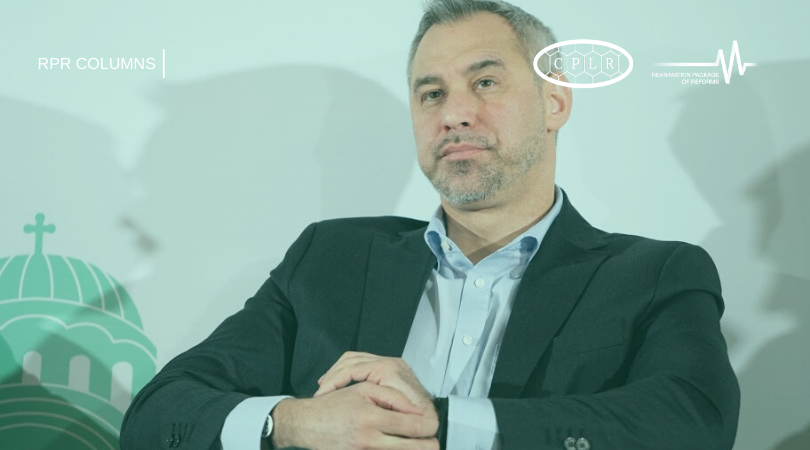 The decree expressing no confidence in the Prosecutor General Ruslan Ryaboshapka, and especially the speech from the rostrum of the Verkhovna Rada of Ukraine by its initiator, MP Maxim Buzhansky, did not contain any professional justification for the ineffectiveness of the Prosecutor General. That is, there was no evidence he “failed to manage” in his position, as has been said earlier by the President of Ukraine Volodymyr Zelensky.

Rather, one could surely say that Ryaboshapka was guilty of being insufficiently “controlled” by the Office of the President, he did not sign the specific suspicion of the fifth President of Ukraine, Petro Poroshenko, or the Deputy Secretary of the National Security and Defense Council, Oleg Gladkovsky, and failed to put the men to jail as it was promised.

This incident has given one more proof that the outdated order of dismissal due to a “no-confidence vote” is problematic. When it was adopted in conjunction with the Constitution of Ukraine, the prosecutor’s office had a separate section in the Basic Law, the investigation, general oversight and other powers that it gradually lost. The prosecutor’s office ceased to be a “monster on the watch of the state” and “controller of all controllers”, and the position of prosecutor general is not seen as sacred.

As the Venice Commission put it in 2013, criticizing the system, the Attorney General “… is not in the Government’s cabinet, accordingly, Parliament should not have the right to express mistrust, which is a purely political instrument. It may be seen as a tool for applying a system of checks and balances in the organization of public authorities, but there is doubt that this will ensure a fair decision.” (para. 14 of the Venice Commission Opinion on the Law on the Prosecutor’s Office No. 735/2013).

That is, despite the political order of appointment, the Attorney General is not a politician and, like any prosecutor, guarantees of independence, including political neutrality, are extended to him. Therefore, this order should be revised at least with the    Qualification and Disciplinary Commission of Public Prosecutors (QDCPP). It is the Commissions responsibility to give an opinion on the performance of the Attorney General.

Regarding Ruslan Ryaboshapka, after only six months it is difficult to conclude on his effectiveness. After all, when taking his plans into account this period is far from adequate. Despite that, no one tried to provide such an assessment. Party discipline and the desire to have a more dependent, controlled Attorney General has done its job.

Was the reform successful?

Such a question is not particularly right in this case. At the same time, trying to define the role of the prosecutor’s office in the criminal justice system – through priorities, a coordinating role for pre-trial investigations, the concept of reforming criminal justice, and ultimately changing the system of evaluating the effectiveness of both the prosecutor’s office and other bodies – all were ambitious, long-term and deserving respect for goals. But the act of putting those who have failed Ukraine as government officials won, its absence to be exact, according to the presidential team.

Thinking about candidates for the post is always a challenging task. Mostly because the number of public candidates is limited. And the new Attorney General may be unknown to the general public.

Exacerbating the situation is the fact that on the eve of the vote, the head of the parliamentary faction “Servant of the People”, David Arakhamia, announced that the candidate for the faction was identified by Sergei Ionushas, only the decision of the head of state is expected for completion.

I have become a great supporter of Sergei Ionushas lately, to say the least, many people have asked me about who he is? This is a perfect example of non-publicity because, among experts and all those who follow the reform of the prosecutor’s office, such a question simply does not arise.

Firstly, Ionusas is a Deputy Chairman of the Verkhovna Rada Committee on Law Enforcement. Second, he could have become the first Deputy Prosecutor-General of Ryaboshapka “to control him” in September 2019 (this is precisely the reason why two positions of the first Deputy Attorney-General were retained at the time of the adoption of the amendments to the profile law, which are still there). However, whether this was an assumption or whether “it simply didn’t work out” is unknown.

Thirdly, Ionushas himself is the initiator of the bill #3062, according to which prosecutors are encouraged to return their uniforms, despite the reform.

However, it is hard to say that Ionushas is the most likely to succeed candidate, as many things have changed since then. At a meeting of the profile Committee for the evaluation of the Decree on the Statement of Confidence in Ryaboshapka, he unexpectedly endorsed the Prosecutor General and stressed the need to complete the reforms.

Ultimately, during the vote, Jonusas refrained from supporting this decision. So the presidential team may have considered the candidate, but the decision was not final.

The likely candidate today is Irina Venediktova – Acting Director of the State Bureau of Investigation. Prior to that, she was a Member of Parliament, chairman of the Verkhovna Rada Committee on Legal Policy, and even earlier – responsible for judicial reform in Zelensky’s team.

Why Venediktova – there are many assumptions. I can only say that competition for the Permanent Director of the State Bureau of Investigations (SBI) is about to begin, in which she plans to participate and has a great chance of winning, given what has already been done for the Bureau.

However, having terminated their mandate and remaining part of the President’s team, it is likely that the position of Director of the DBB may change to that of the Attorney General. Besides, you will rarely see the head of the law-enforcement body from the rostrum of parliament accusing the Attorney General’s Office of failing to perform official duties, which is the non-appointment of procedural heads in criminal proceedings.

It is important to note that neither Ionushas nor Venediktova were discussed in connection with their professional activities before being elected MPs. As the former one was a lawyer and the latter was a civilian. Rather, their nominations were determined by what they did for Zelensky’s team after professional ties have already been established and the team won the presidential and parliamentary elections.

Other candidates – both those who have been named in recent days (Sergei Kiz (former Deputy Attorney General Yuriy Lutsenko), Denis Monastyrsky (chairman of the Parliamentary Committee on Law Enforcement), and those who were named six months ago (Alexei Baganets, three-time deputy Attorney General, Eugene Zakrevskaya, a lawyer for the Heavenly Hundreds), are only candidates who have been nominated by individual groups of people and have not been discussed among the Servants of the People.

My conclusion is that it doesn’t matter who the attorney general is. The question is whether they will be able to distance themselves from the subject of their nomination – the President of Ukraine, that is, be independent.

By all means, it should be a professional lawyer (the law today speaks of higher law education and ten years of legal experience) and he or she should be from the professional environment of prosecutors. Unfortunately, often “civilian” people keep in touch with a political faction (group) that nominates them and does not fully endorse the conceptual role of the prosecutor’s office in the justice system.

We may someday grow to the point that the prosecuting authorities will be able to formulate requirements for the prosecutor general or even delegate their representative to the President of Ukraine (subject to such authority).