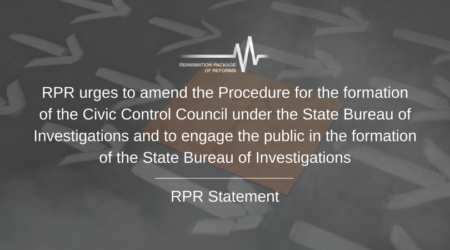 The Cabinet of Ministers of Ukraine published the texts of the resolutions which approved the Regulations on the Civic Control Council under the State Bureau of Investigations (SBI) and the Procedure for the Council formation as well as the Model Procedure for conducting an open competition for the appointment to the SBI offices.

Despite the repeated statements by the leadership of the SBI about the commitment to best practices of civic control over the activities of this newly established law enforcement body, the above mentioned regulations are a serious rollback on this issue.

The highest concerns arise around the Procedure for the formation of the personal composition of the Civic Control Council under the SBI. Respective procedure, in fact, duplicates the one established by the resolution of the Cabinet of Ministers of Ukraine of November 3, 2010, No. 996 for the formation of civic councils under the ministries and other central executive authorities. The process of forming the first civic councils in accordance with this procedure revealed one of the major drawbacks of such a mechanism – the possibility of “illegal takeover” of the civic council by “puppet” organizations which in fact exist only on paper.

Moreover, these documents do not guarantee the possibility for the members of the Civic Control Council to be part of the competition commissions selecting SBI officers. Instead, the typical procedure for conducting an open competition envisages the power of SBI Director  to include representatives of any non-government organizations in the competition commissions. Thus, SBI director can at his or her own discretion engage third parties in the process of employees’ selection.

In addition, respective procedure for the formation of the Civic Control Council sets unreasonably strict and discriminatory requirements for organizations nominating their representatives. Established by clause 5 of the Procedure, the criteria of a minimum of 2-year experience in the human rights sphere and the confirmation of goals and objectives in statutory documents deprive effective and strong organizations of the possibility to delegate their representatives to the Civic Control Council under the SBI.

Since there is no single definition of human rights activities in the Ukrainian legislation, such requirements not only contradict the principle of legal certainty, but also make it possible to toss out representatives of certain non-government organizations.

In view of these circumstances, experts of Reanimation Package of Reforms demand from the SBI leadership to submit for consideration of the Cabinet of Ministers of Ukraine proposals that would allow the following provisions to be reflected in the above said resolutions:

1) the composition of the Civic Control Council shall be formed through the preferential online voting of the citizens residing in Ukraine;

3) candidacies to participate in the competition for the formation of the Civic Control Council shall be submitted by non-government organizations whose statutory activity is related to anticorruption, law enforcement or human rights.