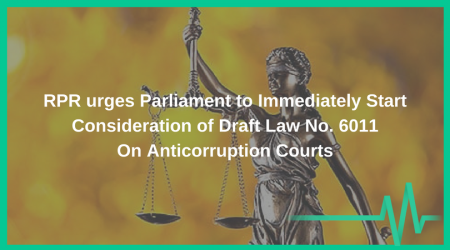 For the first time after the Revolution of Dignity, an official of the highest level – i.e. the suspended from office Head of the State Fiscal Service Roman Nasirov – was not only served a notification of suspicion, but also underwent a preventive measure in the form of detention for a period of 60 days with the alternative of a bail of UAH 100 million. This was achieved not only due to the professionalism of the NABU and the SAPO, but also due to direct control by the public.

Meanwhile, during the proceedings in the case, there was a number of instances when the objectivity and impartiality of the judiciary caused doubt. Therefore, the issue of the possibility of an effective fight against corruption still remains open, as unreformed courts will keep on protracting the litigation and granting advantages to senior officials suspected of abuse of office. These negative trends are also manifested in other cases involving high officials accused of corruption. The courts that are now considering cases of high profile corruption will not be reformed until after a few years, and independent court for such cases is critically needed today.

A way out of this vicious circle is provided for in the current law On Judiciary and Status of Judges that commenced the judicial reform. It stipulates the establishment of independent anticorruption judicial institutions. Besides, adopting a law that would provide for a specialized anticorruption court is one of Ukraine’s international commitments to the IMF. The Parliament has already registered draft law №6011 On Anticorruption Courts, hence there are no formal barriers to a prompt resolution of this issue.

The Reanimation Package of Reforms calls on Parliamentary Committee on Legal Policy and Justice to promptly consider and Parliament – to adopt in the first reading the draft law No. 6011 On Anticorruption Courts. This will make it possible to effectively and carefully prepare the draft law for adoption in full and take into account the suggestions of all stakeholders.

The establishment and operation of anticorruption courts will boost both the effectiveness of the fight against high-profile corruption and the trust in the judiciary in general, which is critical for continuing high quality reforms in Ukraine.