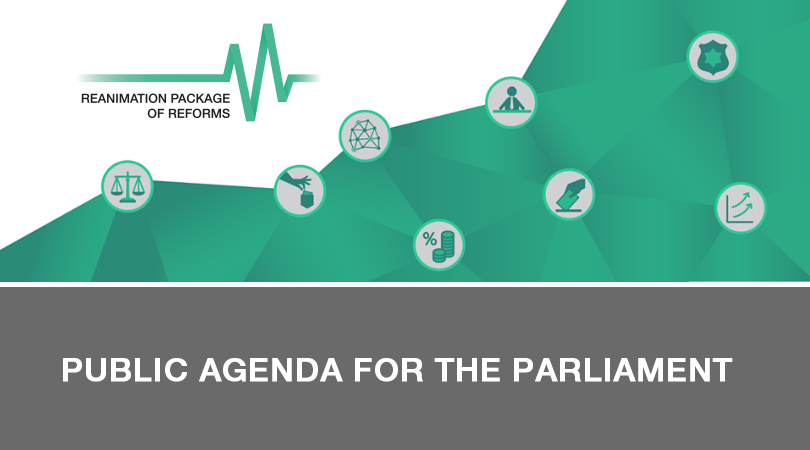 MPs of Ukraine have to adopt a number of draft laws that will accelerate depoliticization of the Security Service of Ukraine, will strengthen decentralization reform and cancel restriction on the sales of agricultural land during the 10th session of the Verkhovna Rada. This and other issues were discussed during a press briefing on the “Public Agenda for the Parliament” organized by Reanimation Package of Reforms on February 5.

In the field of national security, RPR experts advocate two major draft laws. The first one is Draft Law on Parliamentary Control over the Activities of Special Services and Law Enforcement Agencies. The second one is the draft law on the SSU reform. This was reported by Viktor Plakhuta, expert of the RPR’s National Security team, adviser to the Verkhovna Rada Committee on National Security and Defense.

“The draft law on parliamentary control has already been registered in the Verkhovna Rada. It was developed with the participation of professional Ukrainian and foreign experts,” said Plakhuta. He added that the legislation on security forces control is imperfect.

The other priority draft law, concerning the SSU reform, has not yet been registered with the Parliament. However, it is at the final stage of discussion. It involves SSU depoliticization and introduction of real parliamentary control over the special service.

Oleksandr Liemienov, StateWatch founder and chief expert of the RPR’s Anticorruption Reform team, also drew attention to the need for the SSU reform

“The draft law on the reform of the Security Service of Ukraine should be developed in a transparent manner. It is now being transferred from the Presidential Administration to the SSU and back,” he said. That is why the expert community cannot join the process of law drafting yet.

Important provisions to be envisaged in the draft law are as follows: The SSU should lose the function of pre-trial investigation, and the number of special services employees should be considerably reduced.

Denys Kovryzhenko, an expert on the RPR’s Electoral Law Reform team and Senior Legal Advisor to the International Foundation for Election Systems (IFES), told about the electoral reform in Ukraine. It has not been fully implemented yet, and future presidential elections may weaken its implementation.

According to the expert, the widespread practice of bribing voters is due to the lack of proper sanctions in the Criminal Code.

“Draft Law No. 8270, supported by the expert community, is aimed at bridging the gaps in the Criminal Code in the area of punishment for the bribing of voters,” says Kovryzhenko. The most successful period for reforming electoral law is the period between this year’s presidential and parliamentary elections.

Regarding the decentralization reform, it has reached its climax. There are a few steps left for the 2020 local elections to take place under the new legislation. This was reported by Anatolii Tkachuk, Director for Science and Development of the Civil Society Institute and RPR Board member. The Central Election Commission has already received 70 applications for the creation of new ATCs. Now it is necessary to complete the creation of ATCs throughout Ukraine.

In order to complete the decentralization reform, the Parliament should amend the laws “On Urban Planning Regulation” and “On Service in Local Self-Government Bodies”. “Otherwise, residential development will be carried out without the creation of social infrastructure, and the issue of personnel and salaries in local self-government bodies will remain unresolved,” summed up Tkachuk.

Hlib Vyshlinskyi, executive director of the Center for Economic Strategy and member of the RPR Board, focused attention on the agenda of the Verkhovna Rada for this plenary week. After all, MPs will consider the Draft Law on Amendments to Certain Legislative Acts of Ukraine regarding the consolidation of functions of state regulation of financial services markets No. 2413a.

“Without the adoption of the draft law No. 2413a, Ukraine may not receive another tranche from the International Monetary Fund,” said Vyshlinskyi.

The expert has also called on the Parliament to approve the Draft Law on Insurance No. 1797-1 since the current law was approved back in 1996. At the moment, it does not meet the actual international obligations of Ukraine after its accession to the World Trade Organization and the signing of the Association Agreement with the European Union.

In addition, Vyshlyinskyi said that the Draft Law on Amendments to the Tax Code of Ukraine and other laws of Ukraine on reducing the cost of electricity No. 8626 provides for a decrease in excise taxes on electricity. For consumers, this means decrease in prices.

As for the land moratorium, Vishlinskyi added: approval of the draft Law on Land Circulation in Ukraine by the Verkhovna Rada will cancel the temporary moratorium on the sale of agricultural land, which has been in force in our country for 18 years.

The event was held within the institution building program of the Centre for Democracy and Rule of Law, with the financial support of Sweden.