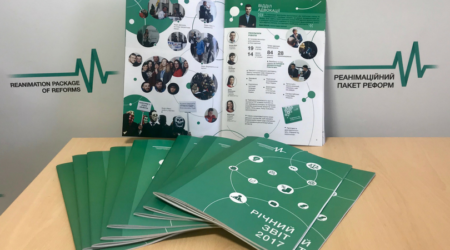 Reanimation Package of Reforms presented a report on the activities of RPR member NGOs for 2017.

On the one hand, 2017 was the year of achievements and advancement of reforms in several spheres. On the other hand, rollback in several areas has forced the public to channel efforts to protect what has been achieved right after the Revolution of Dignity rather than to promote new changes. In 2017, the coalition defended the public and whistle-blowers on a number of occasions. Threats, attacks and physical pressure on public activists took place in Kyiv and, even more so in the regions.

However, in almost every sphere a small step forward was made. With the support of RPR experts and NGOs, 19 laws were adopted as a whole and 14 were voted in the 1st reading in 2017. Numerous statements, analytical materials, direct actions, expert round tables, briefings, forums, meetings with foreign partners, trips by experts to high-level international conferences were held. The coalition worked in three main areas: advocacy, communication, and international activities.

In addition, RPR opened new front for reforms advancement with its regional component. During the year, RPR presented the system of coalition activities in 17 cities of Ukraine. Also, 14 regional coalitions were established. Civil Society Assembly SMARTreforms brought together more than 450 public activists from all over Ukraine, international partners, experts, politicians and journalists in Kyiv.

The report also offers information on funding of the RPR Secretariat, as well as on the organizational and financial support of NGOs.

The report was presented at the Forum “Reforms in the Cross Hairs: Dialogue between the Public and the Authorities”. You can view PDF version here.

RPR as a coalition remains not only a driver for the activities of dozens of member NGOs, but also a platform hub where hundreds of events, meetings, discussions and presentations take place. RPR members work transparently and report on their work. See reports by the member NGOs here.