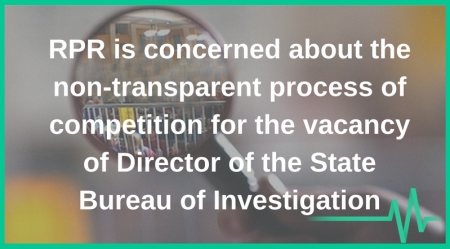 RPR working group on the law enforcement reform draws attention of international partners of the RPR to the process of establishment of the State Bureau of Investigation. The first stage of this process – a competition to fill the vacancy of the Bureau director. The civil society expresses its concern, as the competition process is not transparent and it discredits independence and professionalism of the future leader of the Bureau.

Upon its establishment, the Bureau will be delegated the function of pre-trial investigation from the General Prosecutor’s Office of Ukraine and SBI should actually become a chief agency controlling civil servants, politicians, and law enforcement officers in the country.

The SBI should put an end to the impunity of the law enforcement officers, as it shall investigate – in an independent and efficient manner – the tortures and other crimes committed by the police officers, prosecutors and security officers. The SBI shall also investigate the crimes committed by the politicians and all the civil servants (except for the cases of high-level corruption which are in competence of the NABU), therefore, the Bureau shall be independent of the influence of any political groups.

Taking into account the fact that political groups already control the PGU, the SSU, and the MIA, it is the SBI together with the NABU and the SAP that should become an outpost of investigation of corruption crimes and official malfeasances.

Moreover, the Bureau shall investigate the crimes committed by the employees of the NABU and the SAP. Therefore, if there is any political influence on the SBI activity, effective work of these agencies might be blocked.

Director of the Bureau who will be responsible for ensuring effective and independent activity of the newly established agency is now being selected. However, the process of competition raises serious concern.

The competition panel consisting of nine persons mostly represents the interests of two political forces – the Petro Poroshenko Bloc and the Narodnyi Front – and does not include a single representative of the public. Five votes of the competition panel members is enough to decide on the appointment of a candidate. Therefore, there is a risk that some political force or group of people might unlawfully control the activity of the panel.

Two representatives of the competition panel – Ivan Stoyko (selected by the Cabinet of Ministers of Ukraine) and Vladyslav Bukhariev (selected by the Verkhovna Rada of Ukraine) have not presented their diplomas of higher legal education, which is required of the candidates to this panel by law. Therefore, there is a valid reason to appeal against the results of work of the competition panel and the legitimacy of future leaders of the SBI.

The competition panel has finished the first round of interviews with the candidates. 19 persons out of 50 candidates have been shortlisted. They will be tested on the lie detector, undergo the special check, and take part in the second (the final) round of the interview.

However, some candidates also raise concern, as 11 candidates out of 19 shortlisted are employed in the structures subordinate to the President of Ukraine. Among them: five candidates at the prosecutor’s office, two – at the SSU, two – at the fiscal agencies, one – at the President’s Administration, and one – in the parliamentary faction of the Petro Poroshenko Bloc.

The RPR has voiced its concern with the problems in the activity of the competition panel, but they have been left unattended.

Taking this fact into consideration, the RPR working group on the law enforcement reform recommends the following:

The RPR working group on the law enforcement reform monitors the process of the competition called to fill the vacancy of the State Bureau of Investigation director and deputy directors and will further update you on its progress. The necessity to establish the State Bureau of Investigation stems from the requirement of the Constitution of Ukraine of 1996 to deprive the prosecution bodies of the pre-trial investigation functions. In addition, establishment of an independent and effective body to investigate the cases of torture and other crimes committed by law enforcement officers is required by the decisions of the European Court of Human Rights in the cases against Ukraine, as well as by the conclusions of the European Committee for the Prevention of Torture.
The Law of Ukraine “On the State Bureau of Investigation” was adopted on November 12, 2015, and came into force on March 1, 2016. According to the CCP, the SBI shall be established by November 20, 2017. It shall have 1,500 employees.

The SBI shall conduct pre-trial investigation of the crimes committed by:

Director of the State Bureau of Investigation is appointed by the President of Ukraine as recommended by the Prime Minister according to the conclusion of the commission which called the competition to fill the vacancy of the SBI director (competition panel).

The total number of candidates who passed the first stage (testing) – 50 candidates. As a result of the interviews, 19 candidates have been shortlisted for the second stage of the competition.