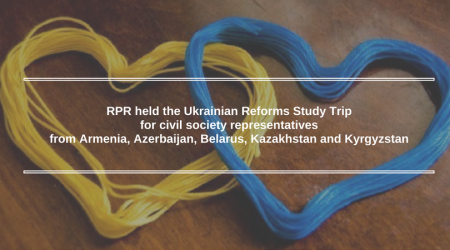 Thirty participants from Armenia, Azerbaijan, Belarus, Kazakhstan and Kyrgyzstan were studying the experience of Ukrainian reforms in Kyiv for five days. This training programme was organised by the Reanimation Package of Reforms, Center for Democracy and the Rule of Law, and the Prague Civil Society Centre to inform activists, public figures, journalists and opinion leaders from Eastern Europe, South Caucasus and Central Asia about the reform process and socio-political transformations taking place in Ukraine over the past three years.

On the first day of the programme, Taras Shevchenko, director of Center for Democracy and the Rule of Law, co-chair of the RPR Board, and Artem Myrgorodskyi, head of the RPR Secretariat, presented the coalition work of the Reanimation Package of Reforms to the participants and described the institutional development of Ukraine’s largest civic platform since its establishment after the Revolution of Dignity. As part of the anti-corruption theme, Vitaliy Shabunin, head of the Anti-Corruption Action Centre, and Yaroslav Yurchushyn, executive director of TI-Ukraine, in detail told the participants about the newly created architecture of Ukrainian anti-corruption institutions, introduction of the electronic declaration system for officials and challenges hindering the effective implementation of anti-corruption policy in Ukraine. The participants also visited the office of the electronic system of public procurement Prozorro, where Oleksandr Starodubtsev, director of the Public Procurement Department of the Ministry of Economic Development and Trade, provided them with insight into its operation. Antonina Volkotrub, financial analyst at the Anti-Corruption Action Centre, and Denys Kovryzhenko, senior legal adviser at the International Foundation for Electoral Systems (IFES), covered such topics as the existing instruments for enhancing transparency of government, including access to public registers, reports of political parties and their public funding. Another element of the anti-corruption programme of the seminar involved a visit to the National Anti-Corruption Bureau of Ukraine. Within the framework of the public administration reform, Serhiy Soroka, manager of the corresponding RPR expert group conducted a presentation about the public governance system of Ukraine, strategic objectives for its optimisation, and peculiarities of interaction between the public and authorities in implementing reforms. Due to their visit to the Centre of Administrative Services Provision, the participants had the opportunity to see the results of reforming administrative procedures for the public. The pace of the judicial reform was described by Mykhailo Zhernakov, leading expert of the respective RPR group, director of the DeJuRe Foundation, and a member of the Public Integrity Council. To provide further insight into this topic, Victor Artemenko, manager of the civic campaign “CHESNO. Filter the Judiciary!”, told about the ways for the public to monitor judges’ activity.

In addition, in the framework of studying the reforms in the justice sector, the participants met with Anastasia Deeva, Deputy Minister on European Integration of Internal Affairs of Ukraine, and representatives of the new patrol police.

As noted by the seminar participant Elena Nazarian, board member of the opposition political party Civil Contract (Armenia), new representatives in reformed security services attest to the fact that the younger generation is ready to take responsibility:

“The girls and boys from the patrol service are very young and inspired by the new reforms. I really liked it that they decided to engage in all these affairs, because in our country there are a lot of people who have long been in the halls of power and wouldn’t go, but at the same time, young people do not want to offer themselves instead. As a result, no one is satisfied with those in power, no one implements reforms, but young people are not very eager to offer their services,” – said Nazarian. In addition to specific sectors reforms, the seminar participants discussed other important topics. In particular, Iryna Sushko, executive director of NGO “Europe without Barriers” told how the implementation of the Visa Liberalisation Action Plan influenced reforms in Ukraine and about the prospects for civil society cross-border cooperation. Igor Rozkladaj, lawyer at the Media Law Institute (Center for Democracy and Rule of Law), introduced the topic of freedom of speech, public broadcasting and operation of the media sector in Ukraine. Finally, for a better understanding of the Ukrainian political system, the participants visited the Verkhovna Rada. “Although not all reforms are moving as smoothly and quickly as we would like them to, but it is important that they are underway,” – believes Tatyana Korotkevich, presidential candidate of Belarus (2015).

“I see that there are already two pluses. This is, first of all, the fact that the reforms are enshrined in legislation, as well as the RPR’s activity and other initiatives. This is the first step. Now you need to set up this mechanism to ensure that it actually works. This is the second step. And the last thing you need is to make the Ukrainian public realize how important it is to use these laws and turn into a strong civil society that can ensure the inevitability of these reforms. Because everything that we have heard and learned within this programme it very positive,” says Korotkevich.

The experience of Ukraine is extremely important to the neighbouring countries as a proof that one can escape from the influence of Russia and that reforms are possible in all post-Soviet countries. The seminar participant Khalid Bagirov, a freelance journalist, founder and chairman of the Legislation Development Centre, said that people in Azerbaijan also kept track of the processes in Ukraine.

“Reforms in Ukraine are important for Ukrainian people. But also these reforms are closely monitored from abroad. The success of these reforms is very important for us. I can say that Ukraine’s special feature is that the current result of your reforms can be considered optimal. You have a diverse political system, and it is difficult to achieve success under such circumstances, but we can say that Ukrainian civil society does achieve it”, said Bagirov.

Civil society representatives from all countries are convinced that such seminars are necessary so that more and more countries could learn about Ukrainian reforms. Galym Ageleuov, founder and president of the Liberty Foundation (Kazakhstan) believes that Ukraine has advanced in a considerable number of areas.

“The training is very useful because countries are at different stages of development. Many useful developments have taken place in Ukraine. There are some moments where we are ahead. But in most, where the authoritarian regime hinders our development, Ukraine has gone ahead and we are very interested. Especially with regard to local government and media law, media development. In these areas we have more control from the government, a desire to control society”, said Ageleulov.

In addition to Ukrainian reforms, participants also were inspired by the structure of the RPR coalition. “We will create such associations at home, – said Rita Karasartova, director of the Institute of Public Analysis and coordinator of the Public Council for Control of Judicial Reform (Kyrgyzstan). – I liked the mechanism of RPR creation. We, being here in Kiev, began to draft what we will do. We have even sent a call via Facebook urging to start working. We will do something similar, we will bring together public activists and experts based on the area of interest, including institutions of public administration. We began to realise that the window of opportunity may open at any time and we really liked it.”

In turn, for the Reanimation Package of Reforms this training seminar served an international programme within which RPR experts had the opportunity to share experience with colleagues from countries where the process of comprehensive reform has not yet begun, and discuss prospects for democratic transformation in Eastern Europe, South Caucasus and Central Asia.