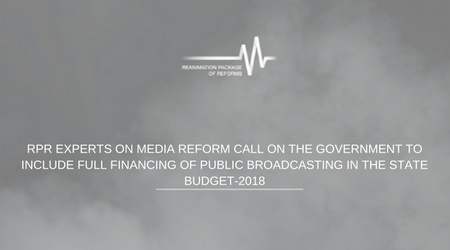 The Reanimation Package of Reforms experts and partner organizations that foster media reform express their concern about the alarming situation, caused by significant underfunding and inherited debt of the public broadcasting in Ukraine.

On January 19, 2017, Ukraine fulfilled its commitment to the Council of Europe from 2003 on the reformation of the state-owned TV and radio broadcasting companies into a public broadcaster. This was made possible due to the joint and coherent actions of the Government, the Parliament and the civil society. One of the fundamental principles of public broadcasting is financial independence, which ensures the effective operation of a public broadcaster. In Ukraine, this is guaranteed by the Article 14 of the Law of Ukraine “On Public Television and Radio Broadcasting in Ukraine”.

The Law on public broadcasting provides that the public broadcaster shall receive 0.2% of the general fund of the state budget for the previous year. This means that in 2017 the Public Joint Stock Company “National Public Television and Radio Broadcasting Company of Ukraine” (UA:PBC) should have received 1.28 billion UAH (around 47 million EUR). However, despite the legislative guarantees, the State Budget of Ukraine for 2017 provided only 970 million UAH, which created a deficit of 300 million UAH at the very start of the reorganization (quarter of the annual budget). These funds are essential for a comprehensive upgrade of the outdated material and technical base, which was last updated 20 years ago, as well as for creation of new quality programs in accordance with the standards of public service broadcasting.

We would like to draw your attention to the fact that for the second year in a row, due to limited budget financing, UA:PBC is able to allocate only 3% of its funds to program production. Public broadcasting has started the process of optimization of its internal structure, but it is impossible to carry out the appropriate technical modernization and optimization of the personnel without full financial support.

The situation became particularly acute after September 5, 2017, when the Supreme Economic Court of Ukraine adopted a decision, according to which the National Public Television and Radio Broadcasting in Ukraine inherits the debt of National Television Broadcasting Company of Ukraine amounting to 10 million 591 thousand EUR to the company Euronews SA. It is important to recall that cooperation between the former National Television Broadcasting Company of Ukraine and the Euronews SA was launched under the initiative of the government of Azarov (decree of the Cabinet of Ministers of Ukraine No. 889-r dated 10/11/2010). Later, the allocation of budgetary funds for license payments under the agreement on creation of the Ukrainian language version of “Euronews” was terminated, which caused a debt and a corresponding lawsuit. Now this inherited debt seriously hampers the possibility of implementing the reform.

In connection to the expected introduction of the draft State Budget of Ukraine for 2018 by the Verkhovna Rada on September 15, Reanimation Package of Reforms experts on media reform call on the Cabinet of Ministers of Ukraine:

– in the draft State Budget of Ukraine for 2018 to provide financing of UA:PBC in full – that is, in the amount of 1 billion 535 million 367 thousand UAH – as guaranteed by the Law “On Public Television and Radio Broadcasting”;

– in addition to the minimum funds, guaranteed by the law, to envisage a one-time additional budget financing that would cover the costs of servicing the debt of the National Television Broadcasting Company of Ukraine before Euronews SA, inherited by the public broadcaster from the former state television.