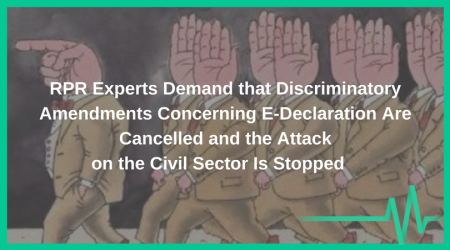 After the Parliament adopted the discriminatory amendments to the draft law No. 6172 “On amendments to Article 3 of the Law of Ukraine “On Corruption Prevention”” obligating the leaders and all members of the anticorruption NGOs, all contractors all these organizations, and even the participants of any anticorruption activities initiated by civil society organizations to file the declarations mandatory for those authorized to perform the functions of state or local self-government, the President did not use his legitimate right and did not refer his proposal to cancel these amendments to the Parliament. Thus, the President has assumed the responsibility for the implementation of this law and its impact.

After the President signed these amendments, entrepreneurs all over Ukraine have started – under one pretext or another – to refuse to provide spaces for the events organized by NGOs, to print booklets, to rent offices or provide other services. And this is true not only for the organizations whose statutes include the goal of fight against corruption. Individual entrepreneurs already submitting tax declarations according to the effective law, start to avoid cooperation with any NGOs, because incorrect and unprofessional legal regulations do not provide a clear understanding which organizations they pertain to. Although the obligation to file e-declarations comes into effect only in 2018, all other provisions concerning financial control have already come into force for anticorruption NGOs, their members, and activists.

Given the absurdity of the regulations which have come into effect – when civil activists not financed from the budget are made equal to the persons authorized to perform the functions of the state or local self-government, and given the unclear wording, legal uncertainty of a number of concepts, and discrimination based on the type of activity – we consider it as a politicians’ revenge against the civil activists and the attack of the authorities against the third sector. These amendments were highly criticized by the representatives of the international community, as no other country in the world has a practice when the representatives of NGOs in general or in some particular category (anticorruption, human rights, etc.) submit property declarations mandatory for civil servants.

We do not consider the President’s proposal to establish a working group to fix the provisions of the new law as a proper way out of the situation, until the discriminatory amendments related to the NGOs are canceled. Only then will we be ready to delegate our representatives to this working group in order to prepare the solutions to regulate lobbying and to improve the legislation on NGOs’ reporting to the state and the activities of the public in supervisory and advisory boards and selection panels.

RPR experts demand that the President and the MPs urgently initiate cancellation of the discriminatory amendments and stop attacking the civil sector. It was only three years ago that we pooled our efforts to drive away the representatives of the regime who thought that one can speak with the civil society only in the language of power and confrontation. We hope that the politicians who came to power in the follow-up of the Revolution of Dignity have learned the lesson about the importance of building partnership with the society. Destroying the trust of the most active representatives of the civil sector, the authorities risk to lose it completely. This is inadmissible for the country that is simultaneously implementing comprehensive reforms and fighting against the military aggression.