Reanimation package of reforms > News > Statements > RPR demands from the Parliament, the Government, and the President to appoint Auditors for NABU as soon as possible 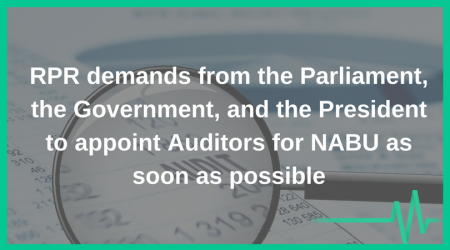 RPR demands from the Parliament, the Government, and the President to appoint Auditors for NABU as soon as possible

The Reanimation Package of Reforms calls on the state leaders – the Verkhovna Rada, the Cabinet of Ministers, and the President – to immediately select three auditors for the National Anticorruption Bureau of Ukraine, nominating world-class professionals experienced in conducting comprehensive inspections of law enforcement bodies and specialized anticorruption agencies.

In late December 2016, the Verkhovna Rada Committee on Corruption Prevention and Counteraction recommended that the Parliament and the Government should nominate Robert Storch, Inspector General of the U.S. Department of Justice, and Giovanni Kessler, Director-General of the European Anti-Fraud Office, as auditors to inspect NABU.

Participation of these two principled experts in this commission will ensure professional and impartial assessment of the activity of the National Anticorruption Bureau of Ukraine. Audit with the participation of professionals of such a high level will give the society a real picture of achievements and challenges of the NABU and the anticorruption reform in general.

The fact that high-ranking officials who constantly emphasize their dedication to the fight against corruption have not nominated their candidates to the NABU audit commission yet provides all reasons to conclude that the authorities are not interested in conducting an impartial, professional, and independent assessment. There are also reasons to talk about politicians’ wish to prevent nominating international experts as NABU auditors.

The draft law No. 5430 which forbids foreigners to join the commission in charge of selecting the director and the personnel of NABU, the external audit commission, the disciplinary commission and the Council for Public Control of NABU was registered at the Verkhovna Rada.

The RPR experts are convinced that adoption of this draft law will clearly indicate the intention of the President, the Prime Minister, and the leaders of parliamentary factions to politicize activity of independent auditors and use the results of their assessment to discredit the Bureau.

Negative audit of the NABU activity is the only way to dismiss the director of NABU. Therefore, we warn the MPs, the Cabinet of Ministers, and the President of Ukraine against the attempts to set up a commission of auditors including politically dependent persons and stress that it is inadmissible to use auditors to initiate dismissal of Artem Sytnyk who lead the NABU’s proceedings against corrupt officials from all political forces, which proved its political independence.

We would like to emphasize that audit of the Anticorruption Bureau is the first attempt to conduct a comprehensive legal and financial assessment of activity of the newly established anticorruption agency in Ukraine, which requires a proper level of expertise, practical experience, and specific knowledge. There are no Ukrainian experts experienced in the conduct of such audits at the moment.

Thus, involvement of experienced international experts in conduction of the first independent audit of NABU is a natural and evident necessity.

The ban on the participation of foreign citizens in these processes, laid down by the draft law No. 5430, limits independence of the Anticorruption Bureau and affects the national interests of Ukraine.

Therefore, the experts of the Reanimation Package of Reforms call on:

– not to consider the draft law No. 5430 which has already received a negative opinion of the scientific-expert department of the Verkhovna Rada;

– to consider the candidates proposed by the VRU Committee on Corruption Prevention and Counteraction during the ongoing plenary week and to delegate a member from the Parliament to the NABU audit commission;

– to take into account the recommendation of the VRU Committee on Corruption Prevention and Counteraction and to nominate immediately a candidate from the Government to the NABU audit commission;

– to delegate the third member to the NABU audit commission without delay.