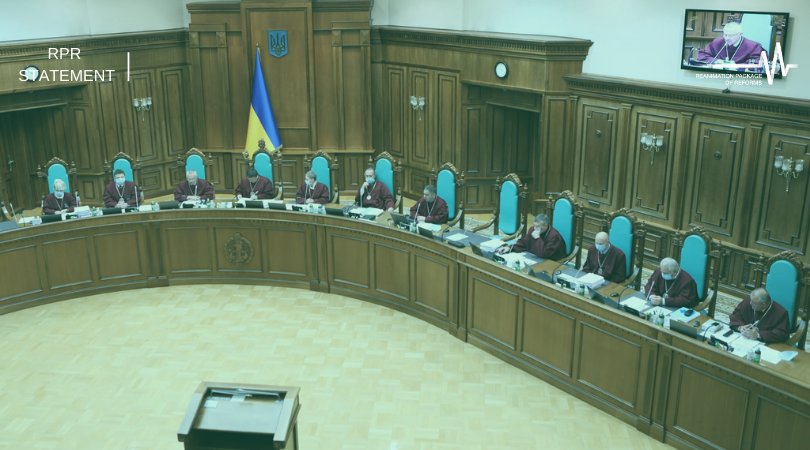 The dubious decision of the CCU from October 27 to declare key institutions of anti-corruption law and criminal liability for knowingly false declaration as unconstitutional initiated a number of unconstitutional actions. These include the immediate termination of the CCU’s powers due to the adoption of an ordinary law, blocking of the CCU’s activities by increasing in the quorum for the Grand Chamber to 17 judges (at the moment, the Grand Chamber includes 15 judges), and restoration instead of re-adoption by the Parliament of legal provisions declared as unconstitutional, etc.

It seems as if possible solutions to the problem through legal means are not even considered,  this may indicate that this situation is being used by some political actors as an excuse to establish control over the CCU, rather than an attempt to maintain anti-corruption legislation.

Required steps as suggested by the RPR Coalition:

DETAILED DESCRIPTION OF THE SITUATION

On 27 October 2020, the Constitutional Court of Ukraine (CCU) adopted, and on the next day promulgated the decision No.13-r/2020 on the case according to the constitutional petition of 47 deputies concerning certain provisions of the Law “On Prevention of Corruption” and Article 366-1 of the Criminal Code.

In the motivating part of the decision, the CCU declared as unconstitutional the provisions of the Law on Prevention of Corruption “concerning the powers of the National Agency on Corruption Prevention in terms of control functions of the executive branch of power over the judiciary”. However, in the operative part of the decision, it declared these provisions as unconstitutional in general, i.e. depriving the NACP of the relevant powers and rights in relation to all subjects, not just judges.

Reaction of the state authorities

The Head of the NACP declared that some CCU judges had a conflict of interest, as they were under the investigation of the institutions that were the subject of the constitutional petition. The NACP also reported that the CCU had denied the NACP access to the state registers required for a special check of declarations of candidates for administrative positions in the government. Without this inspection, none of the state authorities can be appointed. Similarly, the appointment of candidates elected to their positions, in particular the heads of the region and district councils and their deputies, is possible only after they have passed special inspections.

The Minister of Justice of Ukraine announced the development of a bill that would limit (or eliminate) the influence of the NACP on judges, who “will probably get their own mechanism for controlling wealth and expenses, which will not be inferior to the NACP”, anti-corruption legislation will be restored; declaration of false information (or non-declaration) will have to be punished through administrative liability.

The National Anti-Corruption Bureau of Ukraine (NABU) assessed this decision as “political”. In this way, the CCU “not only legitimizes the intentions of politicians and officials to hide illegally acquired wealth from society, but also protects the interests of individual CCU judges, whose false declarations are investigated in criminal proceedings.” As of October 27, NABU was conducting 110 criminal proceedings, in which detectives were investigating almost 180 cases of intentional entry of false information by officials into declarations. 34 cases were sent to the court. There are court decisions against 13 people, including 6 sentences. Due to the decision of the CCU, all these cases must be closed. It is also necessary to understand that these cases are investigated not only by the NABU.

An urgent meeting of the National Security and Defense Council (NSDC) was held on October 29. It issued a decision to oblige the Government to take the necessary measures to maintain the unified state register of declarations of persons authorized to perform state or local self-government functions and to ensure access to state registers for the NACP. The President of Ukraine was recommended to submit an urgent bill on “restoration of the integrity of the constitutional judiciary in the interests of the people of Ukraine” to the Parliament. The Legal Reform Commission was also recommended to intensify the preparation of proposals for the judicial reform.

On the same day, on the basis of the order of 29 October 2020 No.1363-r of the Cabinet of Ministers of Ukraine, NACP restored open access to the register of electronic declarations.

In pursuance of the decision of the National Security and Defence Council, the President of Ukraine submitted to the Parliament a bill “On Restoration of Public Confidence in the Constitutional Judiciary” (Reg. No.4288 of 29 October 2020) and identified it as urgent. The bill, without relying on the provisions of the Constitution, declares the CCU decision as worthless, restores the provisions of the Law of Ukraine “On Prevention of Corruption” and the Criminal Code that were declared unconstitutional, as well as calls for early termination of the CCU.

The reaction of society

On October 29, a protest organized by the Anti-Corruption Center, Automaidan, the DEJURE Foundation, and the Anti-Capitulation Movement took place outside the CCU building. The protest was held against the CCU Decision No.13-r/2020, as well as against the arbitrariness of judges in the CCU, which, in opinion of the protesters, threatened the visa-free regime between Ukraine and the EU, financial assistance from the EU, as well as the European and Euro-Atlantic vector of Ukraine. According to various estimates, several thousands of people joined the protest.

Many civil society organizations expressed outrage regarding the CCU Decision No.13-r/2020 and suggested their own perspectives on overcoming the negative consequences of that decision.