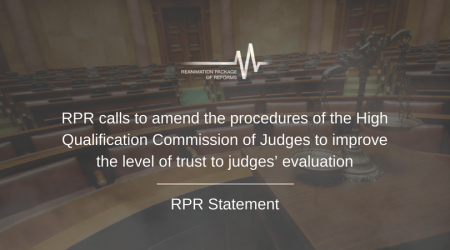 On November 10, President of Ukraine Petro Poroshenko with his presidential decree appointed judges to the new Supreme Court. Coalition of NGOs Reanimation Package of Reforms admits that, although the selection of judges has not fully met public expectations, it has increased transparency and competition in forming this crucially important judicial body compared to its previous composition.

As an outcome of the judicial reform, new selection procedures and new rules of information disclosure have been introduced. Importantly, the role of the public in the process of judges’ selection and evaluation has been established. Due to the creation of the Public Integrity Council and its participation in the selection process, for the first time in the selection of judges public opinion on the Supreme Court candidates was voiced and reported to the High Qualification Commission of Judges.

Unfortunately, the information submitted by the public had insignificant effect on the competition results. Out of 134 candidates who have received negative opinions of the Public Integrity Council, only 51 withdrew from the competition and 8 more voluntarily terminated their participation. Moreover, the competition resulted in the selection of 25 Supreme Court judges who had previously participated in political persecution, banned peaceful assemblies during the Revolution of Dignity, made politically motivated decisions, violated human rights, opposed the reboot of the judiciary or could not explain the origin of their assets. Consequently, there are no reasons to expect a significant increase in the level of trust to the new Supreme Court.

Supreme Court competition is essential to the judicial reform, but it is only the first step in this process. All effective judges shall be evaluated. Competitions to the High Court on Intellectual Property and the courts of appeal should be next on the list. There are at least three years of intensive competitions and qualification assessments of effective judges ahead. Therefore, in order to ensure trust to the selection results, all participants of these competitions should take into account and correct the flaws revealed during the competition to the Supreme Court.  This, first of all, requires the establishment of clear rules and parity-based cooperation between the High Qualification Commission of Judges and the Public Integrity Council.

To ensure constructive cooperation of the judiciary and the civil society in the selection of judges, coalition of NGOs Reanimation Package of Reforms calls on the High Qualification Commission of Judges of Ukraine to: