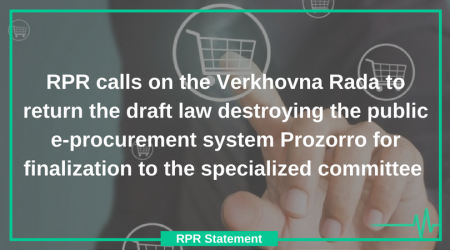 On May 13, 2017, the Verkhovna Rada of Ukraine Committee for Informational Support and Communications presented a comparative chart of the draft law No. 2126а of 19.06.2015 “On the main principles of ensuring cybersecurity in Ukraine” prepared for the second reading. It has then become obvious that the Committee had approved the amendments which reduce to nothing the achievements of the public e-procurement system Prozorro and make it possible to return the control over the System to the “bidding mafia.”

The amendments 50, 51, 69, 81, 82, 92, and 143, introduced by MP V. Bondar and approved by the subject committee, create a legal collision in the definition of an electronic procurement platform, empower the law enforcement bodies to control the activity of these platforms and other procurement infrastructure, authorize the platforms to decide whether any collateral security is necessary (and in which amount), and deprive the Cabinet of Ministers of the right to regulate the cost of services of such platforms.

The said amendments have been introduced in violation of the Verkhovna Rada Standing Orders, as it prohibits to change the draft law fundamentally in between the first and the second readings.

Moreover, it is not the first attempt of the former “bidding mafia” to restore control over the sphere of public procurement. Similar amendments to the draft law “On electronic trust services” have already been submitted, although the committee has rejected them.

The reform of the public procurement system has been the most successful and noteworthy one over the past few years. It has received international critical acclaim and is already “being exported” to other countries. If the draft law is amended, it will entail the rollback of the reform, as well as provoke a negative response from the Ukrainian and the international communities, putting Ukraine’s image at risk.

The experts of the Reanimation Package of Reforms call on the Verkhovna Rada to return the draft law No. 2126а to the Committee for Informational Support and Communications to have it finalized (rejecting, in particular, the notorious amendments 50, 51, 69, 81, 82, 92, 143) and submitted for repeated second reading.