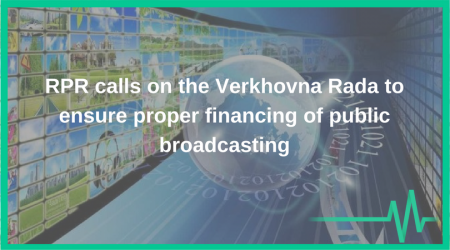 In an effort to remind of Ukraine’s commitments to the Council of Europe and within the Ukraine-EU Association Agreement, the Reanimation Package of Reforms calls on the Verkhovna Rada to accomplish the institutional reform of public broadcasting and to ensure proper financing of further development of the public broadcaster.

The RPR appreciates a significant contribution of the Verkhovna Rada to the establishment of principles of public broadcasting and its timely response to the issues which arose in the course of the reform. The parliamentary factions have also demonstrated punctuality and responsibility while nominating the candidates to the supervisory board of the public joint-stock company “National Public Television and Radio Broadcasting Company of Ukraine” (NPTRBCU PJSC).

However, the efforts of the last three years might not yield the expected results, as so far adequate financing of public broadcasting is open to question. At the same time, it is critically important to ensure financial stability to implement the reform and its outcomes successfully.

The law on public television and radio broadcasting rules that the public broadcaster shall receive 0.2% of the general fund of the state budget for the previous year. It means that in 2017, the NPTRBCU PJSC shall receive 1.28 billion UAH (around 47 million EUR). However, the draft state budget for 2017 allocates only 953 million UAH to the NPTRBCU PJSC, which creates a 300-million UAH deficit right in the very beginning of the reorganization.

According to the estimates of the European Broadcasting Union (EBU), the average financing of public broadcasters in Europe totals 0.39% of budget expenditures, which in Ukraine should be more than 2 billion UAH. For example, Croatia spends 182 million EUR for public broadcasting, Poland – 290 million EUR, and Romania – 215 million EUR.

We would like to draw your attention to the fact that in 2016 the National Television Company of Ukraine could allocate only 3% of its funds to the production of its own program content. A stringent legal status of a state-owned establishment allows neither technical upgrade, nor downsizing. This will become possible only in the newly established NPTRBCU PJSC on condition that proper financing is provided.

Therefore, the Reanimation Package of Reforms calls on the Verkhovna Rada to ensure financing of the National Public Television and Radio Broadcasting Company of Ukraine in 2017 to the fullest extent, as stipulated by the law on public television and radio broadcasting – i.e. in total of 1.28 billion UAH.