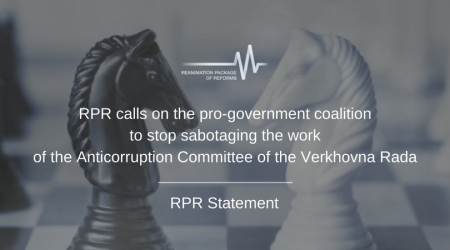 In the beginning of November, Members of the Parliament from the “Petro Poroshenko Bloc”and “People’s Front” factions have activated the efforts to remove Mr.Yehor Soboliev from the position of the Chair of the Committee on Corruption Prevention and Counteraction of the Verkhovna Rada. It is happening despite the fact that Mr. Soboliev has proved himself as an independent and professional manager, whose work is focused on effective performance of the parliamentary committee and support of implementation of anticorruption initiatives.

It is due to the principled position of the Committee’s Chairman that the pro-government factions were not able to appoint a biased auditor for the National Anticorruption Bureau of Ukraine (NABU), which could have undermined NABU’s independence and could have turned NABU into a law enforcement agency controlled by the high state officials. With the help of the Committee’s Chair and several other MPs supportive of the anticorruption reform, the legislation on electronic declaration of assets for public officials was not deteriorated.

The Chair of the Anticorruption Committee is a reliable ally of the civic society in the Verkhovna Rada. In particular, he has made the committee’s meetings unprecedentedly open to NGOs’ representatives and journalists. He has created the Council of Public Expertize,  which has been fruitfully cooperating with NGOs to analyze draft laws with regard to presence of corruption factors therein. As a result, none of such legislative acts has been adopted by the Parliament.

The MPs of the “Petro Poroshenko Bloc” and “People’s Front” factions have been purposely skipping the committee’s meetings for a long time in order to artificially disrupt the quorum. The public is convinced that the deliberate blocking of the work of the Anticorruption Committee and interference with the anticorruption initiatives of its Chairman serves as the evidence of particular political forces’ efforts to block the anticorruption reform.