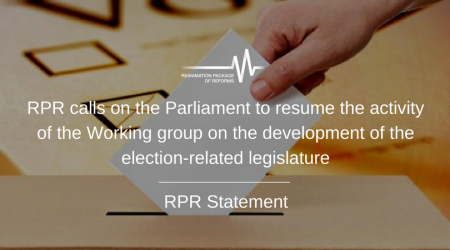 Law-makers shall immediately pay attention to the development of a legal framework for the parliamentary elections scheduled for 2019. As noted in the report of the OSCE / ODIHR Mission in the follow-up of its observation over the parliamentary elections in 2014, “electoral reform must be held in advance of the upcoming elections, and this process shall be transparent and comprehensive.”

It is the Verkhovna Rada of Ukraine of the eighth convocation that is responsible for high-quality legislation and adoption of timely decisions to ensure confidence in the rules, fair practices of the election administration institutions and the elections themselves, and observance of the principles of parliamentarism.

It is now necessary to seek consensus on a new electoral system that would help to reduce the manifestations of political corruption, ensure that the votes given for a particular political force match the number of seats in the Parliament, give a possibility to choose between the candidates introduced by the parties, and create prerequisites for effective interaction between the citizens and their representatives on the platform of a competitive election institution. The open party list electoral system based on the regional constituencies, recommended by the international institutions, meets these goals.

Therefore, the Reanimation Package of Reforms calls on the Parliament to use all the available instruments to ensure public discussion of the status and needs of the electoral law reforms. In particular, to resume the activity of the Working group set up in 2016 to develop electoral laws. This will give a new impetus to the search for consensus on the declared model of the electoral system and to the development of better rules so that the coming elections would meet the pertinent international standards and the public expectations of fair and competitive rules. This way Ukraine will demonstrate its progress in part of the reforms closely monitored by the international organizations.