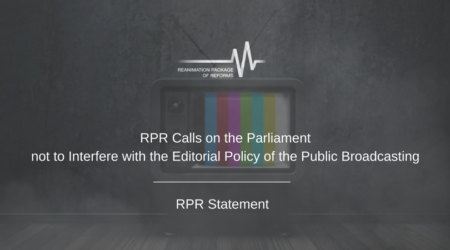 As early as during the first plenary week of the new session of the Verkhovna Rada of Ukraine, on February 6-9, 2018, MPs are planning to consider draft law No.7395 “On Amendments to Certain Laws of Ukraine Regarding the Procedure for Informing on the Activities of the Authorities or Public Officials”. Despite the fact that the draft law contains a number of positive innovations, some of its provisions violate the standards of the Council of Europe, namely, the guarantees of independence of public service broadcasting. In particular, the draft law proposes to introduce the following regulations to the Law of Ukraine “On the Procedure for Covering the Activities of Public Authorities and Local Authorities in Ukraine by the Mass Media”:

“Members of Parliament of Ukraine shall have the right to have their representative activities covered by the public joint-stock company “National Public Broadcasting Company of Ukraine” (UA:PBC) according to the procedure established by the UA:PBC in a program which lasts at least 25 minutes. The MPs’ activity shall be covered by a corresponding separate structural subdivision of UA:PBC. The right to have their activities covered shall be held by the MPs elected in a single-member constituency or in a national multi-member constituency and assigned to a certain region of Ukraine by a parliamentary faction (group). UA:PBC shall cover the activities of MPs of Ukraine exclusively in the manner prescribed by this Law”.

Independence of public service broadcasting in all European countries is based on the guarantees of absence of political and economic interference with the operation of the broadcaster. In particular, the standards of the Council of Europe “On Guarantees of Independence of Public Service Broadcasting” (Recommendation of the Committee of Ministers of the Council of Europe No. R (96) 10 of November 11, 1996, Part І) state that legal framework for the activities of public service broadcasting should ensure their editorial independence, and also describe the means for guaranteeing editorial independence and prohibit interference in the form of censorship or control over their activities.

The same document (Part VI of the Annex) emphasizes that cases in which public service broadcasting organizations may be compelled to broadcast official messages, statements or notifications, inform about actions or decisions of state authorities or guarantee live broadcast to these agencies must be limited to exceptional circumstances clearly stated in the legislation or regulations. Such circumstances are already enshrined in the Law on Public Broadcasting (Article 20) and include the duty of UA:PBC to broadcast the emergency official speeches of the President, the Speaker of the Verkhovna Rada, the Prime Minister, the Head of the Supreme Court and the Head of the Constitutional Court of Ukraine, as well as the President’s New Year greetings.

Airtime quotas in all branches of the Public Broadcasting for MPs on a regular basis do not meet the criterion of “exceptional circumstances” since they govern the provision of airtime to public officials on a permanent basis – which de facto is an interference with the editorial policy of public broadcasting, violation of the relevant standard and a rollback of the reform. It is the public broadcaster that should be solely responsible for selecting the themes of the programs based on the interests of the audience, determining their periodicity and duration, as well as inviting guests of the programs, which should be guided by the standards established by the law: comprehensive, impartial and balanced informing about socially significant events in Ukraine and abroad; free expression of views, thoughts and beliefs, etc.

The MPs’ attempt to interfere with the editorial independence of the UA:PBC unfolds against the backdrop of the largest underfunding of public broadcasting in Europe, as demonstrated in the report by the European Broadcasting Union. According to Art. 14 of the Law of Ukraine “On Public Television and Radio Broadcasting of Ukraine”, UA:PBC funding in 2018 shall amount to at least 0.2% of the expenditures of the general fund of the state budget of Ukraine for the previous year, which is at least 1.54 billion UAH. However, the State Budget for 2018 provides only 776 million UAH for the financial support of UA:PBC, which is 50% less than the stipulated amount.

Approval of the State Budget-2018 with a critically low level of UA:PBC funding took place despite the repeated appeals from the public, UA:PBC Supervisory Board, EU Delegation, Council of Europe Office, European Broadcasting Union, 20 Ambassadors of the European and North American countries in Ukraine, and despite the promise of the Prime Minister Volodymyr Hroysman to fully fund UA:PBC. The problem of substantial underfunding has created obstacles not only for the development of the public broadcaster, but also for the implementation of its mission and the day-to-day operation.

Interference with the editorial independence of UA:PBC by establishing regular quotas for the coverage of MPs’ activities undermines the very idea of the Public Broadcasting in Ukraine, hence putting the success of one of the most important democratic reforms under threat.

In view of these circumstances, Reanimation Package of Reforms, Ukraine’s largest civil society coalition, calls on: