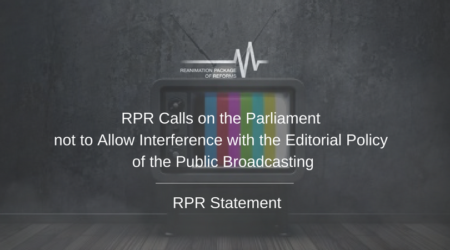 On April 17, 2018, the draft law developed by Maksym Burbak and Mykola Fedoruk No. 6681 “On Amendments to Article 18 of the Law of Ukraine “On Public Television and Radio Broadcasting of Ukraine” (regarding the coverage of activities of executive authorities and other state bodies, local self-government bodies, their officials in the media)” might be brought to the agenda of the Verkhovna Rada. Provisions of this document are contrary to the standards of the Council of Europe regarding the guarantees of editorial independence of public service broadcasting, which Ukraine has undertaken to adhere to.

In particular, the draft law proposes to establish that public service broadcasting “is obliged to cover the activities of executive authorities, other state bodies, local self-government bodies, as well as their officials within the limits specified by other laws”. In practice, it can return the notorious “20 MP minutes” to the national and local channels of the National Public Broadcasting Company of Ukraine (UA:PBC) – the corresponding obsolete regulation can be found in the current law “On the Status of a Member of Parliament”, but is currently, in fact, canceled by the Law “On Public Television and Radio Broadcasting of Ukraine” which cancels the obligation of UA:PBC to cover the activities of officials and authorities on the grounds not provided for by the editorial policy.

Independence of public service broadcasting in all European countries is based on the guarantees of absence of political and economic interference with the operation of the broadcaster. In particular, the standards of the Council of Europe “On Guarantees of Independence of Public Service Broadcasting” (Recommendation of the Committee of Ministers of the Council of Europe No. R (96) 10 of November 11, 1996, Part І) states that legal framework for the activities of public service broadcasting should ensure their editorial independence, and also describes the means for guaranteeing editorial independence and prohibits interference in the form of censorship or control over their activities.

The same document (Part VI of the Annex) emphasizes that cases in which public service broadcasting organizations may be compelled to broadcast official messages, statements or notifications, inform about actions or decisions of state authorities or guarantee live broadcast to these agencies must be limited to exceptional circumstances clearly stated in the legislation or regulations. Such circumstances are already enshrined in the Law on Public Broadcasting and include the duty of the UA:PBC to broadcast the emergency official speeches of the President, the Chair of the Verkhovna Rada, the Prime Minister, the Chair of the Supreme Court and the Chair of the Constitutional Court of Ukraine, as well as the President’s New Year greetings.

The actual reintroduction of regular airtime quotas for MPs does not comply with the European principle of “exceptional circumstances”. Should this draft law be adopted, officials will be able to get airtime on a regular basis, regardless of the availability of the relevant information grounds and without the opportunity to ensure balance of views on air.

This is a gross interference with the editorial policy, breach of standards that discredits the very idea of Public Broadcasting in Ukraine and threatens one of the most important democratic reforms.

In this regard, the largest coalition of non-governmental organizations Reanimation Package of Reforms calls on: