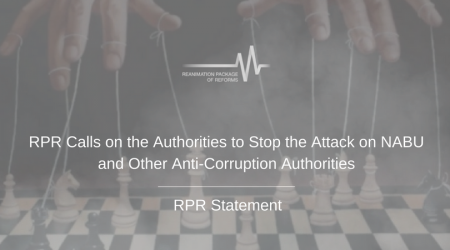 Should this draft law be adopted, National Anti-Corruption Bureau of Ukraine (NABU) will completely lose any guarantees of independence from the political will of the highest government leadership. The draft law enables the dismissal of NABU director based on a protocol on an administrative offense related to corruption. In addition, the document regulates the dismissal of heads of NABU, Specialized Anti-Corruption Prosecutor’s Office (SAPO), National Agency on Corruption Prevention (NACP) and the State Bureau of Investigations by passing a no-confidence motion against them by a simple parliamentary majority. Such a voting may be initiated by the President of Ukraine, the Cabinet of Ministers of Ukraine or 150 MPs.

Taking into account the fact that one of the latest attacks on NABU was NACP’s attempt to draw up a protocol on an alleged conflict of interests in the actions of Artem Sytnyk, NABU director, the scenario stipulated in the registered draft law makes the dismissal of Sytnyk from NABU director’s position more than realistic. According to the experts of Reanimation Package of Reforms, recent events, unfortunately, indicate that the key objective of the authorities as of the end of 2017 is politically motivated dismissal of NABU director.

Draft law “On Amendments to Certain Laws of Ukraine on Ensuring Parliamentary Control” submitted by the representatives of the two largest parliamentary factions creates the basis for political pressure on the anti-corruption bodies and, in particular, on the single independent pre-trial investigation body – NABU. In addition, the provisions of the draft law are contrary to the international standards of anti-corruption bodies’ independence.

Adoption of this draft law will signify the rollback of anti-corruption reform in Ukraine, as well as the total lack of political will to combat corruption on the part of the authorities. In view of this, Ukraine’s largest civil society coalition Reanimation Package of Reforms calls on: