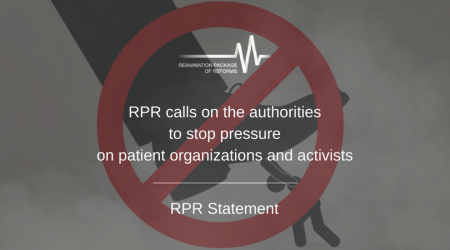 On October 11, investigators of the General Office of the National Police of Ukraine and the Office of the Prosecutor General of Ukraine came to the office of the Charitable Fund “Patients of Ukraine” with the decision of the Pechersk district court to conduct the seizure of documents. According to the court decision, the documents shall be seized from “Patients of Ukraine” and the Charitable Organization “All-Ukrainian Network of People Living with HIV/AIDS” for an emergency tax inspection and audit as well as for forensic economic and graphology examination.

The National Police and the General Prosecutor’s Office of Ukraine accuse the leadership of these organizations in the embezzlement of the assets of the Global Fund to Fight AIDS, Tuberculosis, and Malaria. However, Patients of Ukraine is regularly audited and all the financial reporting data are publicly available on the fund’s website. The Global Fund regularly engages external auditors to confirm the target use of the funds by the recipients. No violations have so far been detected during its term of cooperation with Patients of Ukraine.

Patients of Ukraine and All-Ukrainian Network of People Living with HIV/AIDS were closely engaged in promoting the reform of public procurement of medicines and ensured delegating this function to the international organizations.

For many years, the purchase of medicines has been the source of enrichment for the pharmaceutical mafia operating in Ukraine. According to the Security Service, each year up to 40% of the state budget allocated for the procurement of medicines was spent on “kickbacks”. Today, thanks to the efforts of the above said patient organizations, saved budget funds are spent for the purchase of additional medicines for the sick instead of settling in the pockets of shell companies.

It is important to note that as many as 588 organizations in Ukraine receive funding from the Global Fund, including 354 health facilities (AIDS centers, tuberculosis dispensaries), 124 correctional facilities and 100 NGOs.

Reanimation Package of Reforms supports Charitable Fund “Patients of Ukraine” and Charitable Organization “All-Ukrainian Network of People Living with HIV/AIDS” and associates the above said measures of law enforcement agencies with anti-corruption activity of civil society organizations aimed at protecting the reform of medicines procurement through international organizations. This reform, according to the estimates of the Accounting Chamber of Ukraine and anti-corruption organizations, annually saves Ukraine up to 40% of the state budget for medicines procurement.

Systemic pressure on organizations engaged in anti-corruption activity is also evidenced by the criminal cases initiated against Anticorruption Action Centre (AntAC). One of the proceedings against AntAC was closed in 2016 due to the “absence of the event of a crime”. However, in June 2017, another criminal case against AntAC was launched. Moreover, in response to the official request from the organization, an investigator of the State Fiscal Service’s office in Kyiv failed to inform AntAC on the grounds of the criminal case and the legal merits of claims to AntAC.

Reanimation Package of Reforms views the events described above as continued pressure on public figures involved in destroying corruption schemes on the local and national levels. These cases vividly demonstrate the tendency of harassment of the civil society that has been aggravating over the past six months.

Therefore, Reanimation Package of Reforms demands that the authorities cease the pressure and stop attacks on civil society activists, and ensure the protection of their rights.