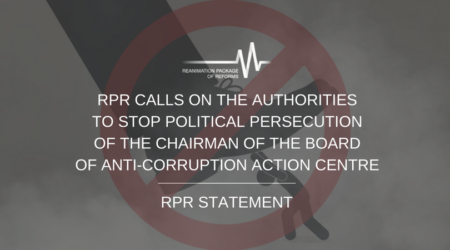 On January 15, 2018, investigative authorities recategorized the case against Vitalii Shabunin, head of Anti-Corruption Action Centre (ANTAC), from the bodily harm inflicted on a citizen to attacking a journalist.

The conflict between Vitalii Shabunin and Vsevolod Filimonenko took place on June 8, 2017 in Kyiv near the Dniprovskyi military registration and enlistment office. The ANTAC head was then also sprayed with pepper-spray projectile.

Reanimation Package of Reforms is convinced that the case resumption and recategorization into charges with a higher criminal responsibility are a continuation of political pressure on Vitalii Shabunin, a former member of the Board of Reanimation Package of Reforms, one of the most well-known fighters against corruption in Ukraine, as well as pressure on the civil society in general.

The situation with Shabunin also testifies to selective justice. For instance, in December 2017, Shevchenkivskyi district court in Kyiv found Yurii Krysin, a defendant in the case of murder of journalist Viacheslav Veremii, guilty and sentenced him to a four-year suspended prison term with a two-year probation. Veremii was killed in Kyiv on the night of February 19, 2014. He and his colleague were returning home from the editorial office by taxi.

On November 7, 2017, near the VIP terminal of the Kyiv International Airport near Zhuliany, when the private jet of the leader of the organization Ukrainskyi Vybir (Ukraininan Choice), Viktor Medvedchuk, arrived there, his bodyguards attacked a shooting team of journalist investigation program Skhemy (Schemes), a joint project by Radio Svoboda and UA:Pershyi TV Channel. The journalists were there to record direct flights of Medvedchuk to Russia. To this day, no one has been punished for this incident.

Moreover, a year ago, Pecherskyi district court in Kyiv found the head of checkpoint security service of the Security Service of Ukraine, Yurii Bondariev, who participated in the forceful detention of the Skhemy shooting team, guilty of an administrative rather than a criminal offense. The military prosecutor’s office closed the case several times because of “the absence of elements of any criminal offense in the actions of the officer of the Security Service of Ukraine”, despite the fact that the video clearly shows how the journalist and the cameraman had their hands twisted. Also, the officers of Berkut special police force, who attacked journalists during the Revolution of Dignity, have not been punished yet.

In view of the above, Reanimation Package of Reforms calls on the authorities to stop political persecution of Vitalii Shabunin, the judiciary – to objectively categorize the case, conduct proper and open investigation, identify the causes of the incident and demonstrate an impartial approach to this case at all stages of the process.

Reanimation Package of Reforms will monitor the objectivity of the investigation and will continue to make every effort to protect members of the coalition and civil society representatives.