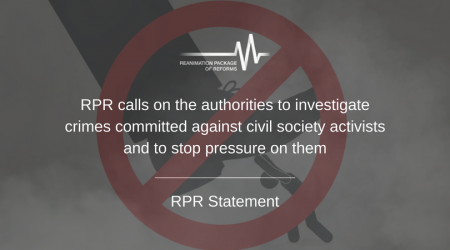 On August 30, two unknown persons attacked Dmytro Bulakh, chairman of the Board of the Kharkiv Anticorruption Center and deputy of the Kharkiv Oblast Council. As a result, he was diagnosed with closed craniocerebral injury, cerebral concussion and fractured ribs. Currently, Dmytro is in a hospital in critical condition. Dmytro’s colleagues associate this assault solely with his professional activity.

The Kharkiv Anticorruption Center is a leading civil society organization in the region which demonstrates high efficiency of its activities. In particular, the disclosure of the scheme regarding illegal transfer of land plots to representatives of the local political elite, carried out with participation of the incumbent deputy Mykhailo Dobkin and Kharkiv City Mayor Gennadiy Kernes, became widely publicized. This case is being actively investigated by law-enforcement agencies. The notice of suspicion was already handed over to MP Mykhailo Dobkin.

Reanimation Package of Reforms considers the assault on Dmytro Bulakh as another attempt to exert pressure on public figures destroying corruption schemes at the local and national levels. Severe beating of Mr. Bulakh vividly demonstrates the tendency regarding harassment of the civil society, which has been aggravated over the last half a year.

Particularly, in Poltava, civic activists have been opposing illegal construction in the historic city centre, legalized by local authorities, for months. There were already two attacks on activists protecting the historic center: one of the victims – Alexander Koba, ATO veteran and volunteer, – received 11 knife wounds; another activist had his mother’s house attacked by a Molotov cocktail after receiving numerous threats.

Geography of pressure on public activists, unfortunately, is very broad. For example, in Odesa, activist of NGO “Green Leaf” Svetlana Podpala, who is engaged in the protection of green spaces in the city and opposes the construction of the coastline, was beaten by unknown persons. In addition, for the Odesa authorities, the use of force is a norm for preventing public activists from participation in the conciliatory council or in the City Council sessions.

These resonant cases in the regions are accompanied by aggressive government policies regarding civil society (namely, implementation of undemocratic practices of introducing

e-declaration for activists in the same manner as civil servants do; “rallies” involving security services, criminal persecution of public opinion leaders, etc.). It seems that such nationwide tendencies let local bandits off the leash for physical pressure against civic activists in the regions.