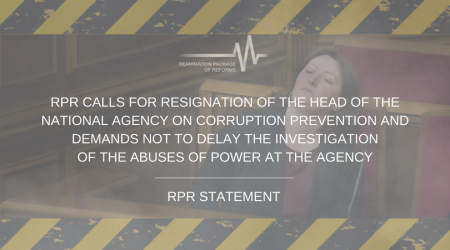 On November 14, the former Head of the department for financial control and lifestyle monitoring of the National Agency on Corruption Prevention (hereafter – NACP or the Agency) Hanna Solomatina testified about the flagrant cases of violation of law and political dependence of the NACP Head Natalia Korchak and other members of the Agency representing the top political leadership of the state.

In particular, Ms. Solomatina stated that the Head of the NACP is personally postponing the launching of the automated verification of electronic declarations of public servants. Moreover, Ms. Korchak is using the e-declaration system for covering up the officials loyal to the government, punishing those who disagree, and pursuing the goal of personal enrichment.

Moreover, there is a supervisor at the Presidential Administration, who provides the Agency with directions concerning the verification of electronic declarations of public servants. Without naming this person, Hanna Solomatina noted that this state official is also running for a position of the Head of the State Bureau of Investigation. Currently, there is only one person who meets both criteria, Oleksiy Gorashchenkov, the First Deputy Head of the General Department of strategic planning and operational support of the Presidential Administration. He is also a member of a committee responsible for election of the NACP leadership, meaning that he has real tools of influence on the Agency’s activities.

The published information has already been forwarded to the National Anti-Corruption Bureau of Ukraine (NABU) for investigation. In this regard, civil society coalition “Reanimation Package of Reforms” demands: