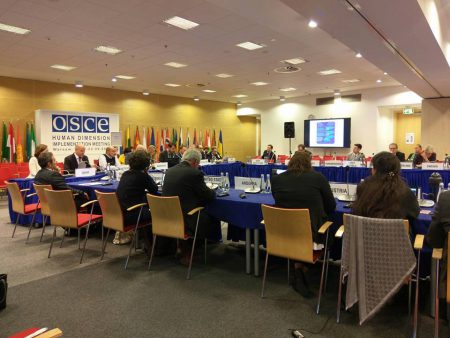 On September 22, in the framework of the OSCE Human Dimension Implementation Meeting in Warsaw, Reanimation Package of Reforms, CHESNO. Filter the Judiciary! campaign, DEJURE Foundation and the Public Integrity Council held a panel discussion on the role of the public in the selection and assessment of judges in Ukraine.

This event has become a reflection of the Ukrainian civil society on the OSCE Conclusion regarding the Law on the Judiciary and the Status of Judges, which, in particular, contains novels about the Public Integrity Council – a new civic institution in the judicial system. In particular, the conclusion suggests that the competence of the Public Integrity Council should be narrowed down to an advisory body.

Halyna Chyzhyk emphasized in her speech the importance of preventing the appointment of 30 unscrupulous as Supreme Court judges and the need to work on the improvement of competition procedures, evaluation criteria and transparency of the decision-making process of the High Qualification Commission of Judges of Ukraine: “Even the most transparent procedures are worthless if the result is unsatisfactory. Therefore, recognizing all the progress that has been achieved, I must admit we still need to work on two things:

1) not letting the notorious candidates be appointed, but that is now in the hands of the High Council of Justice; and

2) improving procedures, criteria of evaluation, and the most important one – transparency of decision-making in the Commission, so we do not face such cases in the future.”

In his turn, Mykhailo Zhernakov drew attention of the OSCE Office to the fact that European standards mentioned in the OSCE Conclusion should be implemented with consideration of the national system and circumstances, particularly in transitional democracy states such as Ukraine. “We have made great progress in reforming the judiciary, but we have still made a mistake.  Following recommendations of the European partners, we have implemented judicial self-governance based on the principle “majority of judges elected by their peers” in the judicial councils. However, this was too early a step, and it led to the election of new judges by representatives of the old and unreformed judiciary body. As a result, we have 30 out of 120 candidates to the new Supreme Court who do not meet the criteria of integrity and professional ethics, and there are still many questions regarding the other 60. That is why the general principles should be applied with consideration of the local specifics and conditions of the country.  We express our gratitude to the OSCE Office for Democratic Institutions and Human Rights for its remarks regarding the Public Integrity Council. At the same time, taking into account current situation in Ukraine, we could not except an advice as to the revision of the role of the Public Integrity Council in the selection of judges and to tolerate the access to this procedure of organizations sponsored by the aggressor state”.

During the event, the OSCE has also expressed support for the public participation in the selection of judges. Anna-Lise Chatelain, legal expert of the OSCE Office for Democratic Institutions and Human Rights, particularly emphasized that the purpose of the OSCE recommendations was to improve the provisions of the law in order to increase the effectiveness of the judicial reform and the procedures for the selection of judges as well as to guarantee their independence and accountability to the society.

Based on the outcomes of the event, representatives of the Reanimation Package of Reforms, CHESNO.Filter the Judiciary! movement and DEJURE Foundation have agreed on further cooperation with the OSCE Office to ensure sustainable progress of the judicial reform in Ukraine.