Reanimation package of reforms > News > Analytics > “Reforms under the Microscope”: Overview of the key reform developments in 2016-early 2017 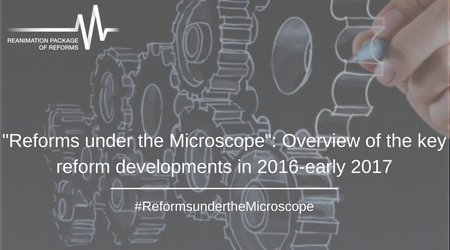 “Reforms under the Microscope”: Overview of the key reform developments in 2016-early 2017

In this publication, experts of the Reanimation Package of Reforms – Ukrainian coalition of non-governmental organizations – analyze the key tasks that Ukraine is facing on its path towards institutional, economic, and social reforms, as well as assess the status of their regulatory support and implementation over 2016 and in early 2017. Overview of each reform includes the description of its progress and stakeholders’ participation, as well as presents recommendations for the authorities for further action.

In particular, the period covered by this publication was marked by the following breakthroughs: the establishment of a full-fledged work of the National Anti-Corruption Bureau and the Specialized Anti-Corruption Prosecutor, the launch of the electronic declaration system, the transfer of entire public procurement to the ‘Prozorro’ system, the launch of judicial reform through the adoption of constitutional changes in part of the justice sector, continuing amalgamation of territorial communities in the framework of decentralization, launch of public broadcasting, appointment of first state secretaries. The banking system and deregulation were improving and a number of important laws in the field of energy and environment, bringing Ukraine closer to the European standards, have been adopted.

“Were the reforms slowing down or have they accelerated?T he answer to this question can be found in RPR’s overview “Reforms under the Microscope”. Experts from the leading civil society organizations analyze progress and delay in implementing key reforms that have started since the Revolution of Dignity. During this period, the Reanimation Package of Reforms was not only an observer, but has actively advocated reforms and at the same time opposed attempts to roll back the most important changes. We offer this review to citizens, government officials and international partners of Ukraine, offering the expert support of civil society to facilitate the reform process”, –  said Vadym Miskyi, Head of the Advocacy Department of the Reanimation Package of Reforms.

Despite the progress in certain areas, there are still a lot of challenges. The RPR Coalition calls on the responsible authorities to focus on continuing the reforms that were initiated: proper implementation of constitutional changes in the justice sector, launch of fair and effective new Supreme Court, creation of a system of anticorruption courts as the last resort in the system of prosecution for corrupt high-ranking officials, establishment of the State Bureau of Investigations and transfer of investigatory functions of the Prosecutor’s Office to this Bureau, unblocking the land market, healthcare system reform and the pension system, the introduction of a proportional electoral system with open lists during the elections of people’s deputies, adequate financial support for public broadcasting, continuation of public administration reform and decentralization, creation of competitive electricity and heat markets, and energy efficiency in the residential sector. We expect a continuing effective cooperation in order to facilitate tangible changes.