Reanimation package of reforms > News > Events > Referendum without Manipulation & Top 3 Problems of the Civil Service: Discussion of Experts and Politicians 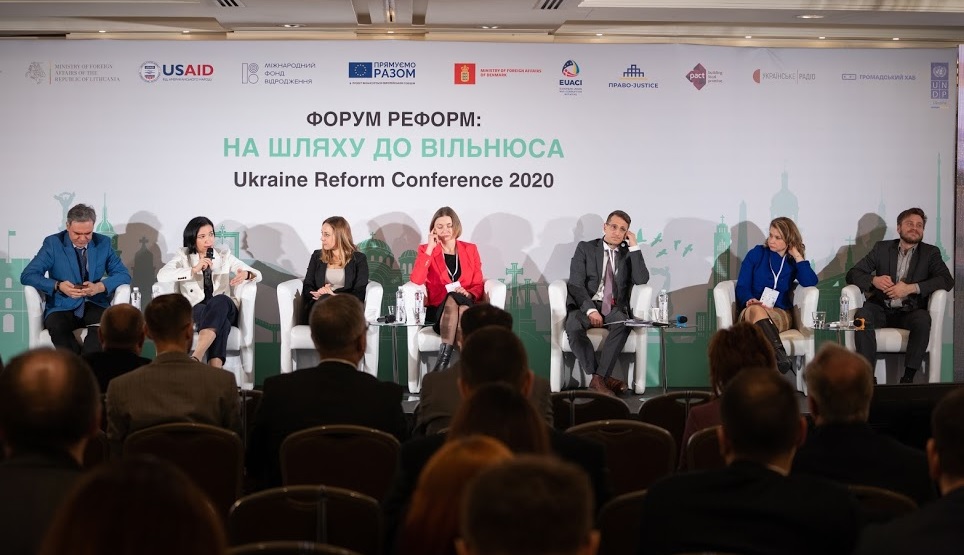 Referendum without Manipulation & Top 3 Problems of the Civil Service: Discussion of Experts and Politicians

What should a referendum law be like? Is the new Electoral Code perfect? How to implement an effective model of civil service and decentralization of power? The speakers at the Reforms Forum: On the Road to Vilnius spoke about this during the first-panel discussion. Good Governance: How to Ensure Public Power and Effective Governance.

Verkhovna Rada Committee on Legal Policy focuses on three main areas: amending the Constitution, the legislative basis for opening up the land market and the law on an all-Ukrainian referendum. Deputy Chairman of the Committee Olha Sovgyria said this. Major reform is currently underway to amend the Constitution in the areas of reducing the number of MPs from 450 to 300, abolish the legal monopoly, and create subsidiary bodies within Parliament, which will become analytical centers for the development of regulatory acts.

When drafting the land market bill, the question of the imperfection of the regulation arose, Sovgyria said. Some political forces misuse “legislative spam”: they make many identical changes, causing MPs to “listen to the same amendment all day.”

A referendum is an important constitutional tool for direct democracy. But it is not a panacea for resolving all political disputes and can be used by politicians for their own interests. Alina Zahoruyko, Deputy Chairman of the Verkhovna Rada Committee on Organization of State Power, Local Self-Government, Regional Development, and Urban Planning, warns about this. To protect against political manipulation in a referendum it is necessary to develop a fuse in the form of a democratic procedure for carrying out this will, says the expert of the Center for Political and Legal Reforms, Co-chairman of the Coalition of the RPR Coalition Yulia Kyrychenko. “There was no democratic law on the referendum in Ukraine at all. Initially, there was an outdated law before the 1996 Constitution. Then in 2012, pro-Russian forces extended a law (repealed in 2018) that was part of a plan to violate the integrity of our country”, as Kyrychenko recalled.

A new democratic law is being drafted on a referendum with fuses against manipulation of politicians, concluded Kyrychenko.

The new Electoral Code is a “small leap”, because, overall, with a positive assessment, it has some drawbacks. That is why civil society is actively involved in the development of the amendments, says MP Alina Zahoruyko.

At the same time, the current Electoral Code does not change the system of local elections. The chairman of the board of the OPORA Civic Network Olha Aivazovska draws attention to this, expressing her hope that this problem will be solved in April-May 2020. “The new electoral code is a breakthrough, and it seeks to allow electoral cancellations at the place of residence rather than centralization, as well as gender quotas,” Aivazovska said, preventing these changes from being synchronized in the required elections.

The protesting electoral system will not run its course without requiring inappropriate impressions for its own suffrage.

“Now they are punishing voters for the appearance of ballots outside the precincts. But separated for centralized technical candidates and other abuses of passive suffrage,” – sums up Aivazovska

Civil service reform is fundamental because all the reforms in the country are done by civil servants, says the head of the National Agency of Ukraine for Civil Service Oleksandr Starodubtsev. He cited 3 major problems in the civil service:

Starodubtsev gave the formula of rebooting power: new leaders to create new meanings + HR-managers to translate these ideas to each employee + new foundations of organizational work.

“Within 3 months of my tenure, a civil service strategy was developed, HR management components emerged, and recruitment at the civil service was synchronized with leading Ukrainian job search sites”, –  as NAUCS chairman reported.

The government restarts power without ideological, conceptual and personnel training, according to Ihor Koliushko, chairman of the Center for Political and Legal Reforms. “There is still no policy analysis and no communication with the public. The rule of law is also ignored because it focuses on populist ideas”, – as he said.

Decentralization has already reached 70% of the population and 40% of the territories. But the existing asymmetry between decentralized and centralized territories further weakens Ukraine, warns Anatoliy Tkachuk, chairman of the board of the Civil Society Institute. Decentralization reform is a priority of the previous and existing authorities. The discussion is focused only on amendments to the Constitution, as chairman of the sub-committee of the Verkhovna Rada on administrative-territorial structure Vitaly Bezgin points out. “If you consider decentralization when territorial intervention changes, then you do not need to amend the Constitution. But decentralization makes it possible to create all the highest forces, which necessitates change”,- as Bezgin said.

The difference in the models of decentralization of power of Petro Poroshenko and Vladimir Zelensky lies in the draft of the incumbent President, where is no item about the special status of Donbas, as deputy summarized.