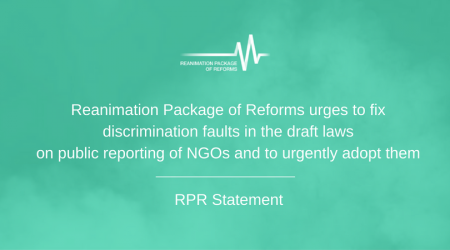 On September 7, the President of Ukraine stated that implementation of electronic declaration for public activists was a mistake and called on the Verkhovna Rada to adopt his draft laws that cancel the mandatory electronic declaration for participants of any anticorruption activities and, at the same time, introduce discriminatory rules of public reporting to non-governmental organizations and their contractors (draft laws No. 6674 and No. 6675).

Experts of the Reanimation Package of Reforms state that the lack of publicity and involvement of stakeholders in the development of these draft laws led to significant shortcomings that should be urgently eliminated.

Convention of the Coordinating Council for Development of Civil Society under the President of Ukraine, dedicated to the discussion of registered draft laws, became a positive step. At this Council, representatives of civil society organizations expressed their concerns and agreed on a joint work with the Presidential Administration, aimed at further elaboration of these issues. At the same time, the Coordinating Council did not reach an agreement on specific deadlines for preparation and adoption of the draft laws, and hence there is a risk that the current provisions on electronic declaration of a wide range of civic activists and contractors of NGOs will come into force on January 1, 2018.

Introduction of public reporting is quite a universal tendency of time that should apply to all legal entities. By generally supporting the idea of increasing transparency of non-profit sector, Reanimation Package of Reforms experts underline that suggested draft laws contain a number of provisions that contradict national and international legislation, are discriminatory and consequently should be withdrawn taking into account the following proposals:

Taking all above said into account, experts of the Reanimation Package of Reforms call on the President of Ukraine and the Verkhovna Rada of Ukraine to eliminate the discriminatory provisions of the draft laws No. 6674 and No. 6675 in joint cooperation with the public and to adopt them as soon as possible, having taken into consideration proposals of the civil society.