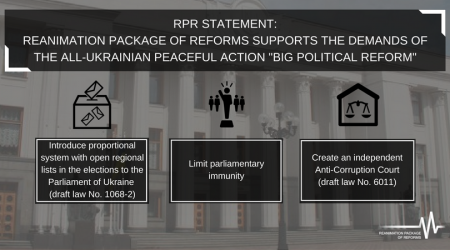 Transition to a proportional electoral system with open regional lists will:

Reanimation Package of Reforms supports the amendment to paragraph 3 of Article 80 of the Constitution of Ukraine in the following wording: “Members’ of the Parliament of Ukraine can not be, without the consent of the Verkhovna Rada of Ukraine, detained or arrested before the conviction of the court, except for detention on the ground of a grave or particularly grave crime”.

The establishment of Anti-Corruption Court will put an end to corruption cases of dozens of top officials that remain blocked for months in the courts throughout the country. Every fourth corruption case of a top official stays in the courts without any review, while these officials are resuming their positions in the courts. If Anti-Corruption Court is established, the judges elected with participation of the public and international partners will be able to ensure justice and appropriate level of trust to the institutions.

The goal that Reanimation Package of Reforms is pursuing through the above said peaceful protest is to urge members of Parliament within the current legislative framework to fulfill their election promises and Ukraine’s international obligations.

Any other political demands of the participants of this action represent their own position and can not be interpreted as a position of the signatories of the respective Joint Memorandum of Understanding. In case of any provocations, attempts to seize state institutions, violent actions and so on, Reanimation Package of Reforms will terminate its participation in the action and withdraw its signature from the Memorandum.