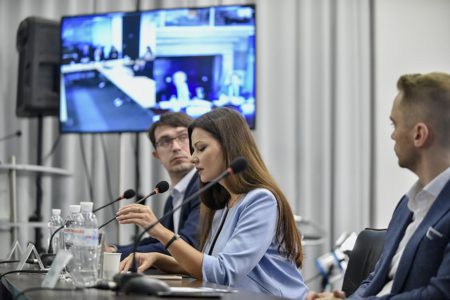 The task force is aimed to provide a platform for stronger US–EU–Ukrainian engagement and information sharing prior to the upcoming Ukrainian presidential election in March 2019 and parliamentary election in October 2019. Organizers believe that the initiative will enable Ukrainian CSOs to voice their policy priorities directly to the US and European decision makers, while to the US and EU audiences it will offer an access to the expertise of Ukraine’s most reputable think tanks on the key issues Ukraine is likely to face in the pre-election period.

“Since 2014, civil society in Ukraine has been one of the strongest influencers on the policy making. However, without the support of the international community most of Ukraine’s reform achievements would not be possible. That is why, we have been looking for the ways to make our engagement with Western partners more regular, and the suggestion of the German Marshall Fund to establish a task force turned out very timely,” Olena Prokopenko said. She pointed out that due to a significant number of undecided voters, there is no clarity as to what the country’s political leadership will be in less than a year. Prokopenko suggested that in view of this uncertainty and the impact that both Ukrainian elections will have on the country’s relations with the West, they need to be closely monitored by the international partners. Besides, according to her, the challenges Ukraine may face in countering disinformation or undue interferences in its elections may be important for the Western partners to analyze in light of the upcoming elections in the EU and the US this year and in the next 2 years.

Mykhailo Zhernakov, member of the Board of the “Reanimation Package of Reforms” and director of the DEJURE Foundation, described the current problems in the Ukrainian judicial sphere, such as very dismal efforts in replacement of the judges, specifically in the appellate courts, and continued pressure on them from politicians and other actors alike. “One of the reasons is the notorious political will so to say, that the big part of government did not really want to change the judiciary, they still want to keep it as a tool for the elections and for the other purposes. Also, there is an institutional problem that we, unfortunately placed the implementation of the reform into the arms of the same old judges that we would like to change (…) This is like making turkey vote for (…) Thanksgiving,” he said. Mykhailo Zhernakov also spoke about the low levels of trust for the courts, stating that according to the latest polls, Ukrainians trusts the civil society 6 times as much as they trust the judiciary branch representatives.

Speaking about electoral reform, Denys Kovryzhenko, senior legal adviser to the International Foundation for Election Systems (IFES) and expert on the election reform of the “Reanimation Package of Reforms”, concluded that it is doubtful the new electoral system will be in place before the upcoming election as the debates in Verkhovna Rada regarding the amendments to three electoral laws (on parliamentary, presidential and local elections) are still ongoing. He also noted the difficulties the internally displaced persons and labor migrants face when voting, stating that they not only receive just a party ballot in parliamentary elections, meaning they cannot select a majoritarian candidate, but cannot vote in local elections as well. Denys Kovryzheko congratulated the government on electing new members of the Central Electoral Committee, but remarked on the difficulties they will be experiencing, in particular with possible hacker attacks that will disrupt the elections. “When we talk about the priorities for the election reform, what we need first just to wait until it is clear whether the election code is processed or not and whether it has any chance to be adopted by the Parliament. If not, then we need to quickly fix the key issues well in advance of at least parliamentary elections,” the expert concluded. The next meeting of the task force is tentatively scheduled for the late November. In the next 12 to 18 months the task force will host events and information exchanges, and it will connect U.S., Ukrainian, and European policymakers, opinion makers, think tanks, and civil society organizations. It will also look at issues impacting the conduct of the elections prior to, during, and after the elections, as well as U.S. and EU policy towards Ukraine heading into elections.

The group will also review ongoing Ukrainian reform efforts including good governance, judicial reforms, the rule of law, combatting corruption, promoting economic development, and ensuring the safety of civil society. Finally, the group will focus on internal and external efforts, notably by Russia, to exercise undue influence on the outcome of the elections and Ukraine’s trajectory. Between the sessions the participants will be invited to join online directory for information exchange and ad-hoc inquiries on the above said issues.

Live streaming of the event is available below.