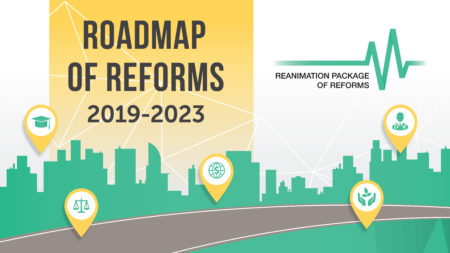 On October 30, 2018, Reanimation Package of Reforms presented a draft Roadmap of Reforms for Ukraine for the next 5 years, analytical paper prepared by the coalition experts, and announced its public discussion until November 30th.

Elections of the new president and parliament of Ukraine will be held in less than a year. Undoubtedly, the election results will influence the vector and pace of state development for the 5-year post-election cycle. There is a high risk that during the election campaign, the action plan for Ukraine will be manipulated by political technologies and populist slogans.

Therefore, in response to these challenges, Ukraine’s largest civil society coalition Reanimation Package of Reforms presented its Roadmap of Reforms, an up-to-date expert vision of the country’s reform and development priorities for the next five years in 21 areas of public policy.

Practitioners, experts from state and local government agencies, professional and business associations, active citizens, politicians and political forces have been invited to join the discussion and submit their comments and proposals to the draft document.

Public discussion is the final stage in the preparation of the Roadmap. The end goal of the document is to suggest an action plan for Ukraine which can be included in the electoral programs of the political forces running for the presidential and parliamentary offices and then consistently implemented as a state policy, in case of voters’ support.

“We believe that this program can be offered to politicians so that they can take into account proposals developed by the public in their election programs for the presidential and parliamentary elections. […] Open discussion of the Roadmap of Reforms is the most transparent and honest way of appealing to politicians to suggest integrating civil society’s vision into their programs. We invite to the discussion all those who share the need for an action plan to enable positive change in the country,” said Taras Shevchenko, Co-Chair of the Board of Reanimation Package of Reforms.

“We want this Roadmap to become important for the whole civil society and for our politicians. As a non-partisan coalition we do not have preferences as to who should win these elections; what we do care about is whether those elected will implement the Roadmap of Reforms, which we believe should ensure sustainable development of the state,” said Yuliia Kyrychenko, member of the Board of Reanimation Package of Reforms.

The discussion of the economic section of the Roadmap will take place on November 9. Public administration block will be presented on November 13, while the rule of law section is going to be discussed on November 15. The Roadmap will also be publicly discussed at the regional level with the support of the RPR partners – local reform coalitions. Besides, proposals can be submitted online on the RPR website.