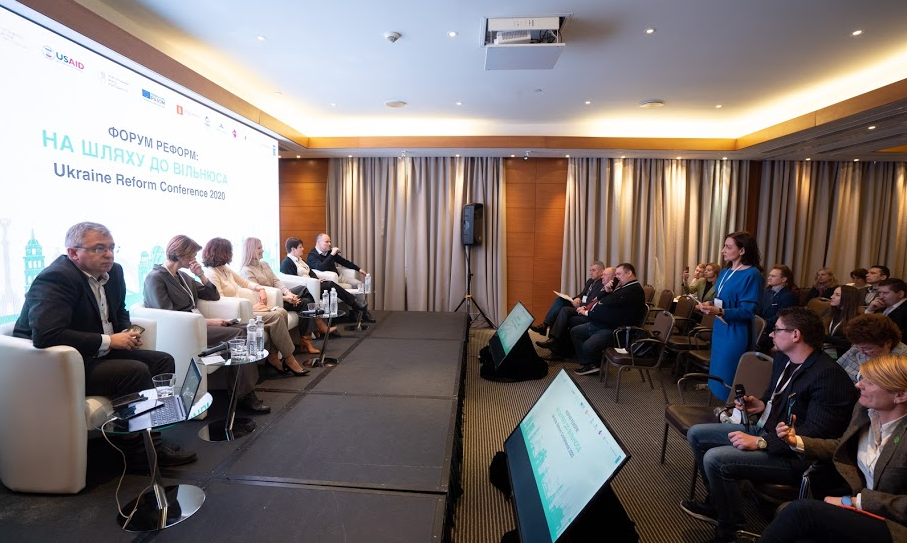 How will the 2nd stage of the medical reform go? What has changed in the education system? Why the state doesn’t understand why it needs Suspilne Media? The speakers of the Reforms Forum: On the Road to Vilnius spoke about this during the panel discussion #4 Human capital development: moving towards European standards of quality of life.

In what direction is the medical reform going?

A strategy of improving the quality of healthcare for the period before 2030 is being developed at the moment. The previous strategy has been developed back in 2016. Member of Parliament, Chairperson of the Parliament Committee on Public Health, Medical Assistance and Medical Insurance, Mykhailo Radutskyi, spoke on the subject. He has stated 3 main priorities in the medical field:

“Thanks to the transplant law passed last year, in Kovel alone the number of heart transplants exceeded that of the entire country the year prior”, says Radutskyi.

However, an important anti-tobacco bill No. 2813 was transmitted from the Verkhovna Rada Committee on National Health, Medical Assistance and Health Insurance to the Committee on Finance, Tax and Customs Policy. Nonetheless, the project has “not a single word about money”, notes the People’s Deputy.

The first stage of the medical reform (primary level of medicine) is already demonstrating its success. The next stage of the reform (secondary level) will begin on April 1. However, the sum of UAH 72 billion is not sufficient according to Tatyana Yurochko, Professor at the School of Public Health at National University of Kyiv-Mohyla Academy. “There are risks that the second stage of the medical reform will not be as fast the one prior. After all, there is a lack of proper education among health care managers, on whom the success of the reform will largely depend”, she fears. “After reforming the primary level of medicine doctors got new requirements in the fields of management and communication. The civil society is ready to help with the newly emerged problem”, she says.

How to reform education?

Preschool education always demanded particular attention and legal regulation. Therefore, at the moment, the conception of preschool education is being developed, based on which the corresponding bill will be created, predicts Yuliia Hryshyna, Member of Parliament, Member of the Parliament  Committee on  Education, Science, and Innovations and Chairperson of Subcommittee on Highest Education. In January this year, a new law on secondary education was adopted and the rules regarding financing higher education institutions were changed.

“Instead of non-transparent financing of higher education institutions, open criteria for providing funds were introduced. Hence not only the number of students but the level of international cooperation, scientific research, cooperation with employers, etc.”, explains Hryshyna.

“A new model of teacher training is currently being implemented: now they can attend training and enhance their professional knowledge in NGOs”, says the expert.

Does the media need regulation?

Suspilne Media is officially an independent body, but it faces numerous limitations. Suspilne, in particular, owns 192 thousand  of land but it has no right to govern it. Zurab Alasania, Head of the Ukrainian National Television Company, spoke on the topic. “The State does not quite understand what Suspilne is and why it is needed”, he thinks.

All Ukrainian media has never been politically neutral: it has either been used to attack or to defend its owners. As a protest against media policy, journalists were only able to quit their job.

“The only media independence tool is a separate tax on its maintenance”, thinks Alanasia.

In Ukraine, there are almost no media that state their mission: an articulation of interests from the people to the authorities, emphasizes Natalia Lyhachova, Head of NGO “Detector Media”. The next important task for the media according to her is building a dialogue between all social groups and the authorities: “The authorities don’t always oppose independent media, it can and should be a partner”.

Verkhovna Rada has to approve the new bill on mass media, because of the current one being outdated: according to it, internet disclosure is not seen as mass media. This was emphasized by Andrii Motovylovets, Member of Parliament, Member of the Parliament Committee on Freedom of Speech. “Russia spends lots of finance on the manipulation of Ukrainian society through mass media. To counteract this a law on misinformation should be adopted”, People’s Deputy argues.

The culture is back on the margins

3.4% of GNP of Ukraine is created by the cultural and creative industries, but in households, only 0.8% of the budget is being spent cultural services, it is significantly lower than that of countries that belong to the EU. The one to emphasize the issue was Natalia Kryvda, Professor of the Department of Ukrainian Philosophy and Culture at the Taras Shevchenko National University of Kyiv. International documents (such as the Agenda for the 21st Century UN) call culture the 4th element of sustainable development and call for the integration of cultural practices into all national instruments. But in Ukraine culture is “somewhere on the margins”, sums up Kryvda.