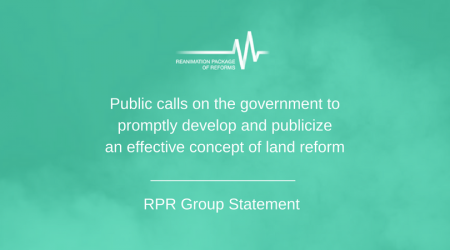 Despite the postponement of the requirement to launch the land market referred in the Memorandum on cooperation with the IMF, as recently stated by the representatives of the Fund, land reform shall further remain a priority on Ukraine’s reform agenda. In this regard, experts of the Economic Development group of Reanimation Package of Reforms call on the Cabinet of Ministers and the parliament in cooperation with expert community to develop and publicize by the end of September 2017 an effective concept of the reform that will enable the launch of the functional land market starting 2018.

Experts call on the authorities not to stop halfway of the decision on lifting the moratorium on sale of agricultural land crucial for both the Ukrainian economy and at least 7 million landowners.

Experts emphasize: long-term discussions on the appropriate model of land reform in Ukraine should reach the logical conclusion, which is the launch of the land market, in view of the following:

Experts of Economic Development group do not support restrictions on the pool of market players (except for Russian), the establishment of the maximum area of land plots and minimum regulatory price. According to experts, these limitations will curb demand, glut the supply and distort the market. Alternatively, open market can generate significant overall economic effect in the first ten years after its introduction.

In view of the above, experts of Economic Development group of Reanimation Package of Reforms call on the authorities not to delay land reform and in joint cooperation with the public intensify the efforts aimed at selecting an appropriate model enabling the launch of an effective land market in Ukraine in the nearest future.