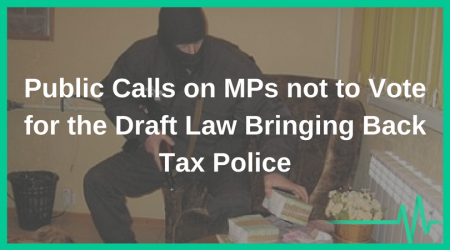 On February 7, MPs – members of the parliamentary Tax and Customs Committee, disregarding the stand of the Ministry of Finance, unanimously supported the amendment by the Committee Chair Nina Yuzhanina to the draft law No. 0940, introduced with a gross violation of the parliament Rules and Procedures, which brings back the notorious tax police.

Meanwhile, the Ministry of Finance has expressed a strong dissent with the idea of renewing the tax police, which has been illegal for over a month now pursuant to the Law No. 1797-VIII of December 21, 2016. Both expert community and business associations support the Ministry’s point of view on the issue.

The actions of Tax and Customs Committee Chair seem especially cynical, given that during the government meeting headed by the Prime Minister on February 6 it was agreed that the draft law on the establishment of the financial police, prepared by the Ministry of Finance, shall be finalized in the nearest weeks. The financial police will be established as an analytical rather than a punitive agency to replace the tax police. A number of business associations and independent experts have already voiced their support for this draft law.

In view of this, the public calls on the Verkhovna Rada not to vote for the draft law No.0940 which renews one of the most corrupt agencies in the country that used to repress businesses and contributed to the growth of the shadow economy in Ukraine for years.

Experts of the Reanimation Package of Reforms on taxation and budgeting reforms demand that the Cabinet of Ministers approve the draft law on the financial police and submit it to the parliament with no further delay, preserving all the progressive provisions developed in cooperation with the public. These provisions pertain to the following issues:

– transparent and competitive selection of employees;

– downsizing (2,5 thousand employees instead of 10 thousand);

– new working tools: transition from punitive functions to the investigative and analytical ones;

– cancellation of powers to audit businesses;

– development of an exhaustive list of grounds when the financial police can initiate audits of businesses by the authorized bodies;

– preventing an overlap of state agencies’ powers; divesting the Security Service of Ukraine, the Ministry of Internal Affairs, and the State Fiscal Service of their powers in the field of investigation of economic crimes;

– annual reporting of the financial police to the parliament;

– alleviating administrative pressure on businesses and elimination of corruption risks.