Reanimation package of reforms > News > Events > Prime Minister of Ukraine at the Reforms Forum: Ukraine is doomed to succeed. 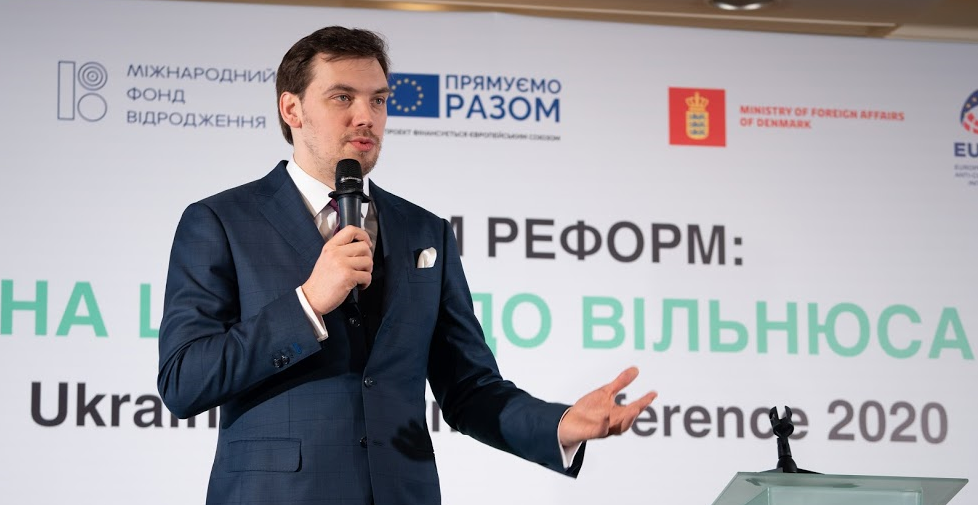 Prime Minister of Ukraine at the Reforms Forum: Ukraine is doomed to succeed.

Becoming of Ukraine as a democratic state is one of the main achievements of our country in recent years. Ukraine has shown readiness for change, despite the information war and efforts to push Ukrainians together. The Prime Minister of Ukraine Oleksiy Honcharuk began his speech at the Reforms Forum: On the Road to Vilnius on February 25.

“Economic development is one of the government’s main focuses. Freedom in the economy is a market. That is why reforms are of paramount importance to the land market, the labor market and the capital market”, – Oleksiy Honcharuk said.

Civil society is a guarantor of Ukrainians’ intolerance of corruption. Therefore, the public is an important partner of the Government in the fight against this phenomenon.

In 2019, the Government focused mainly on energy security: Naftogaz’s banding gave an advantage to Ukraine in negotiations with Russia to sign a new gas transit contract. The Government will focus on development in 2020

Honcharuk emphasizes they’ve inventoried the country, including education and medicine. They’re trying to make the state effective because any penny in the budget of Ukraine is paid by taxpayers.

Reforms Forum is a good tradition started by the Reanimation Package of Reform, which became the driving force in the country after the Maidan as a Prime Minister said.

“Ukraine is doomed to succeed when we talk in this format about the necessaries of reform and everyone does their best to change,”- he said.

The country itself does not change, this is preceded by the work of many people. On reform, the Government and other government agencies are the best allies of civil society.

Answering questions about the prospects of pension reform, Oleksiy Honcharuk stated about the International Audit of the Pension Fund in 2020:

“The Pension Fund is planning an international audit by a professional auditing company. It is necessary to determine the possibility of savings by reducing administrative costs”.

But a complete reform of the system will take several years.

“The issue of pension reform is closely linked to the development of the tax system. We have already set up a working group to come up with proposals to reform the tax system, ”,- as the Prime Minister said.