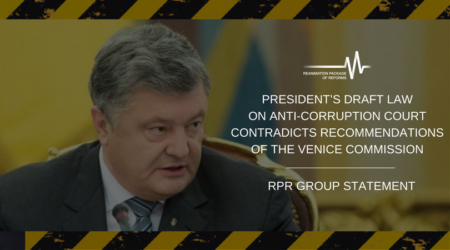 Civil society experts consider the President’s draft law on High Anti-Corruption Court as the one that does not comply with the Venice Commission’s opinion and does not provide for the independence of anti-corruption judicial proceedings.

Draft law No. 7440 submitted by President Petro Poroshenko for parliamentary consideration on December 22, 2017 contradicts the main recommendation of the Venice Commission. Namely, it does not envisage the key role of international partners in the selection of anti-corruption judges. Instead of providing the experts nominated by international donors the key role in the selection of anti-corruption judges, the draft law leaves them with a merely advisory role. In fact, the draft law stipulates the establishment of a new Public Council, similar to the Public Integrity Council in the Supreme Court competition. Opinions of the Public Integrity Council were expected to prevent the appointment of tainted candidates as new Supreme Court judges. However, due to their non-binding status this did not happen.

The draft law on the creation of the anti-corruption court also proposes the creation of International Experts Council. However, negative conclusions of this council will not oblige the High Qualification Commission of Judges (HQCJ) to disqualify questionable candidates. The decisions of the Council of International Experts can be overruled by 11 members of the HQCJ, just as the opinions of the Public Integrity Council in the Supreme Court competition were. It is important to remember that in the Supreme Court selection, the HQCJ overcame the veto regarding 60% of judges with negative public opinions. As a result, the judges who covered up Maidan judges, participated in political persecution, violated human rights and/or could not explain the origin of their wealth entered the Supreme Court. Now the President proposes to replicate the model of an advisory body, which was not successful in the Supreme Court competition, for the selection of anti-corruption judges. Thus, international experts will only be used to legitimize the appointment of the “favored” judges.

Moreover, the draft law introduces the requirements to candidates for the positions of anti-corruption judges which will make it practically impossible to form a court. Thus, in addition to judicial, legal or academic experience, every candidate for the High Anti-Corruption Court should also have “extensive experience of legal aid in the field of combating corruption in international organizations or international judicial institutions”. There are clearly very few people with such experience. Moreover, the HQCJ will be able to disqualify even candidates with that kind of experience, since it will have full discretion to decide (without any specific criteria) whether a particular candidate has sufficiently “extensive” international experience.

We emphasize that the conditions proposed by the President regarding the selection of judges and the jurisdiction of the High Anti-Corruption Court contradict recommendations of the Venice Commission and negate the very purpose of the establishment of the anti-corruption court.

In view of the above, Anticorruption Expert Group of Reanimation Package of Reforms and NGOs – signatories of this statement call on the President of Ukraine to withdraw draft law No. 7440 and to submit a new draft that would comply with the recommendations of the Venice Commission.