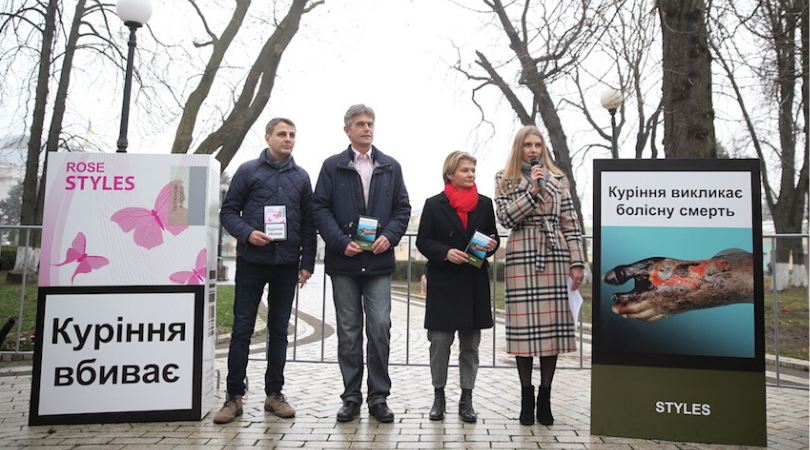 Packaging has a significant impact on the sales of goods. This has been proven by marketing research on a variety of products, including tobacco. That is why the tobacco industry uses geometric shapes, bright colors, sequins and even animal images to shape the brand appeal.

The introduction of a standardized packing is an effective tool in the fight against tobacco addiction. Standardized cigarettes packs should be of the same dark olive color with large health warnings covering 65% of the pack; furthermore, the packs should not contain any tobacco logos or trademarks as well as smoking propaganda. All trade names and product names must be unified in the same color, font and format. This is exactly how the World Health Organization recommends labeling cigarettes in its Guidelines for Implementation of Article 11 of the Framework Convention on Tobacco Control. Ukraine has ratified this Convention as early as 2006 and is bound by it.

“A smoker sees a cigarette pack at least 20 times a day and 7,000 times a year: when he wants to smoke and when he buys. Therefore, experts see each of these times as an opportunity to inform the smoker about the real risks of smoking. And tobacco corporations use tobacco packaging for advertising purposes,” said Otto Stoyka, Ph.D., a smoking cessation specialist.

According to Vladyslav Zbanatsky, Deputy Director General of the Public Health Center of the Ministry of Health of Ukraine, studies show that real illustrations of diseases on cigarette packs increase people’s awareness of the dangers of tobacco consumption and encourage smokers to quit smoking. Smokers themselves say that these are the cigarette packs that often allow them to learn about the dangers of smoking. Introducing plain packaging is part of a comprehensive approach to tobacco control.

In Australia being the first to introduce “simple packaging” back in 2012, smoking prevalence has fallen in the last 3 years from 19.4% to 17.2% among adults1.

On Ukrainian packs, warning images appeared in October 2012 which had a positive effect on reducing the prevalence of smoking. Since then, the health warnings on tobacco packages have not changed, and the effectiveness of the preventive action of the warnings has decreased accordingly. At the same time, color brands and other elements of cigarette sales are still being printed on packs. “Therefore, it is important to adopt the world leading standards of warning people about the consequences of tobacco use in the near future,” said Oksana Totovytska, an expert at NGO “Life” [Життя]. In Ukraine, it is necessary to introduce a standardized tobacco packaging and to increase the size of medical warnings about the harm of smoking from 50% to 65% of the packaging surface. Warnings should be placed on the top of the front and back parts of the pack. The warnings will include realistic images of smoking-related diseases and be updated annually. The use of graphic warnings helps prevent smoking, especially among children and young people, being also a smoking cessation factor. KIIS survey in 2017 shows that 54% of current smokers have decided to stop smoking because of warnings placed on the cigarette packs.

At the same time, tobacco companies are aware of the importance of tobacco labelling and, therefore, they actively oppose to the introduction of the plain tobacco packaging. Their arguments relate to various aspects: the increase in the number of illegal products, the technical complexity of implementation, the infringement of intellectual property rights, etc. All of these arguments are easily rebutted, so there will be no problems with the transition to simple packaging. Tobacco corporations have already lost several court disputes on this issue – for example, in Australia.

While “faceless” cigarette packs make smoking unstylish, it first and foremost encourages young people not to start smoking at all. It can also make adult smokers think about the effects of cigarette consumption and get rid of nicotine addiction. According to MP Lada Bulakh, it helps to reduce the prevalence of smoking as well as the incidence and mortality from non-communicable diseases. “At the same time, it is not necessary to spend the budget money to implement this initiative. The new parliament has a good opportunity to protect the lives and health of people, including children and young people,” the MP said.

In Ukraine, the prevalence of smoking among people aged 15 years and more is 20%, i.e. 7.2 million people in Ukraine smoke. Every year, 85,000 people die from smoking-related diseases in Ukraine. Every year, the Ukrainian economy loses 3.2% of GDP due to the costs of smoking-related treatment or loss of disability. Ukraine is obliged to implement the WHO Framework Convention on Tobacco Control which it ratified in 2006 and to implement European rules on tobacco control and new smoking devices, in accordance with the EU-Ukraine Association Agreement.