Reanimation package of reforms > News > Uncategorized > Open letter of the Ukrainian civil society to the leadership of the European Union ahead of the upcoming annual meeting of the EU-Ukraine Association Council on December 8, 2017 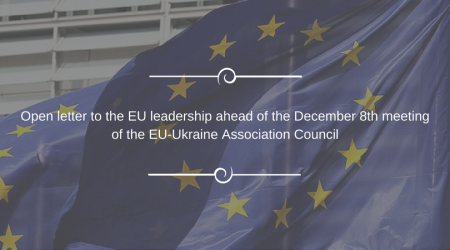 Open letter of the Ukrainian civil society to the leadership of the European Union ahead of the upcoming annual meeting of the EU-Ukraine Association Council on December 8, 2017

On behalf of Ukraine’s civil society and reform community, we would like to address you regarding the evaluation of the reform process taking place since the signature of the EU-Ukraine Association Agreement. We acknowledge significant results Ukraine has achieved, particularly in the spheres of investigation of high-profile corruption and ensuring transparency, which to a great extent were due to the efforts, support and investments of the European Union and its Member States.

However, the more threatening anti-corruption reform becomes to the vested interests of the political elites, the more resistance and pressure it tends to meet. That is why in order to ensure further progress in fighting corruption and preventing the rollback of anti-corruption reform, we call on the European Union to continue closely monitoring implementation the developments in this area and conditioning further assistance on specific reform deliverables.

The decision of the Ukrainian people to pursue the path of European integration, which triggered the Euromaidan protests back in 2014, and a subsequent process of implementation of the EU-Ukraine Association Agreement became a milestone for Ukraine’s comprehensive transformation into a rule-of-law democracy. Provisions of the Association Agreement have been serving as a powerful toolbox for further reforms aimed at eliminating corruption and enhancing justice, good governance and human rights. It has also substantially strengthened the role of Ukraine’s vibrant civil society, allowing it to become a driving force in the reform process.

In the justice sector, Ukraine’s reform progress has already produced a number of tangible results: an institutional framework for independent investigation and prosecution of top-level corrupt officials has been set up, and one of the most advanced electronic systems in the world requiring public officials and politicians to disclose information about their private assets was introduced. In the field of public procurement, public finance management and access to government and public databases of social significance, high standards of transparency of public institutions have been set. Additionally, one of the most corrupt state agencies – traffic police – is being transformed into the new Patrol Police in the framework of the comprehensive law enforcement reform. With all these measures undertaken, Ukrainian society is step-by-step developing zero-tolerance for corruption.

However, a significant number of anti-corruption achievements are now experiencing a serious rollback. Verification of e-declarations of public officials is being sabotaged, the majority of corruption-related cases are stuck in the Ukrainian non-reformed courts for months, while National Anti-corruption Bureau, Ukraine’s recently established anti-corruption agency, is facing mounting pressure from other institutions representing the old system with vested political interests. Moreover, over the past year, Ukrainian civil society activists and NGOs have been systematically subject to discrimination and even physical attacks, particularly in the regions.

In order to advance the reforms that have already been implemented and to prevent their rollback, close cooperation between Ukraine’s civil society and its international partners is crucial. Namely, we would like to emphasize the following measures that we are calling our European partners to strongly support:

– establishment of an independent anti-corruption court to be selected with the involvement of international experts, as recommended by the Venice Commission;

– protection of the National Anticorruption Bureau of Ukraine (NABU) from further attacks (limiting NABU powers in criminal procedure, undermining ability to investigate illicit enrichment and false statements in e-declarations, cutting the list of officials that fall under NABU jurisdiction, criminal case of Prosecutor General’s Office against NABU Director, administrative case of the National Agency for Corruption Prevention against NABU Director, numerous attempts to appoint a NABU auditor loyal to the ruling elites etc.);

– rebooting the National Agency for Corruption Prevention by reshuffling its leadership (open and transparent competition with the involvement of international experts) and providing it with automatic verification modules to ensure progress in verification of state officials’ electronic declarations;

The Association Agreement is a lighthouse for Ukraine’s further transformation and implementation of the systemic reforms. Moreover, the conditionalities of the EU assistance programs that Ukraine undertook to comply with have proven to be among the most powerful tools for effective reforms advocacy. Meanwhile, as follows from the recent statement of the European Commission dated December 1st, the Commission will not disburse its last, third, tranche of macro-financial assistance to Ukraine until the four outstanding measures in the anti-corruption and economic field are implemented. This decision is yet another acknowledgement of Ukraine’s insufficient progress in advancing its reform agenda and a clear signal that the pace of the reform should significantly accelerate.

That is why, in the run-up to the 4th annual meeting of the EU-Ukraine Association Council of December 8th and the upcoming United Nations Anti-corruption Day of December 9th, we would like to kindly ask you to urge the Government of Ukraine to honour its anti-corruption commitments, including listed above, and emphasize the potential consequences of further backsliding of the reform process in Ukraine.

We are grateful for your consideration of this letter and firmly believe that only in cooperation with our international partners, particularly the European Union and its Member States, we will be able to build a law-governed state and make Ukraine’s democratic transition irreversible.

Centre for Democracy and Rule of Law (CEDEM)

Centre for Political and Legal Research

Center for Public Monitoring and Research