Reanimation package of reforms > News > Columns > No partial measures: How Ukraine can meet the challenge of Russia’s mobilisation 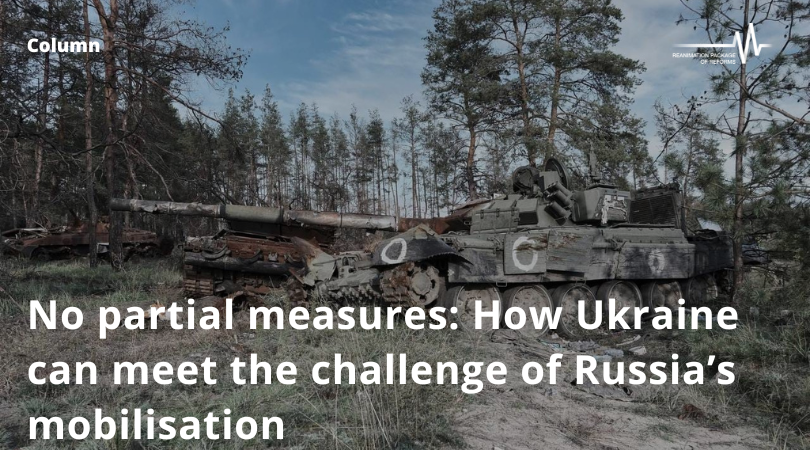 No partial measures: How Ukraine can meet the challenge of Russia’s mobilisation

President Vladimir Putin’s “partial mobilisation” is Russia’s first since the second world war. Officially, he plans to boost troop numbers by calling up 300,000 reservists. But Putin’s official decree does not specify the number of conscripts he plans to recruit, nor does it feature a date on which the mobilisation campaign will end. Several media outlets, meanwhile, have reported that Russia in fact plans to draft a million soldiers – and not only from reserves. This has raised credible doubts about the ‘partial’ nature of the Kremlin’s mobilisation. The Ukrainian armed forces therefore need to prepare for a large influx of Russian troops arriving in Ukraine over the next few months.

But, even at this early stage, Russia is struggling to train and equip its new recruits. Generally, it takes several months for a mobilisation announcement to translate into the dispatch of soldiers to front lines, which is the time necessary to assemble and train combat groups. This time, however, Russia sent conscripts to Ukraine just a few days after Putin’s announcement – some of whom Ukrainian forces have already captured. The Russian command is likely using these untrained men to undertake tasks related to the ‘official’ reasons for the draft: the defence of occupied territories, as well as for digging trenches and installing protective structures so that professional soldiers’ time and energy is not wasted.

The next wave Putin sends to the front lines may include soldiers who have received more training. They will likely take the place of units that have been fighting in Ukraine since the start of Russia’s all-out invasion in February. The Russian command has so far been reluctant to permit rotations – because it (rightly) believed that after returning to Russia the soldiers would attempt to leave the army. Russia will need all the officially announced 300,000 troops to fulfil this task. But it would be naive to think that the Kremlin’s plans are limited only to maintaining the occupied territories.

Following staged ‘referendums’, Russia has ‘officially’ annexed the Luhansk, Donetsk, Zaporizhzhia, and Kherson regions. And even though it does not fully control any of these regions, the sham referendums apply to the whole of each province. The Kremlin, in turn, will claim that Ukraine has attacked Russia’s territory and use this to legitimise further offensive actions. Naturally, such actions require significant manpower.

Furthermore, the Kremlin is unlikely to have given up on taking Kyiv and forcing regime change, which could indeed be a key goal of Putin’s mobilisation. Ukraine has drafted around a million people to fight, but the entire Russian contingent amounts to just 250,000 (that is, if it has managed to compensate for its significant losses). Moscow may therefore be trying to establish at least parity in manpower before it attempts to take more territory.

How the Ukrainian armed forces should respond

The Ukrainian army will have a clear numerical advantage in personnel, even with waves of Russian conscripts arriving at the front lines. But, for Ukraine to continue its successful counteroffensive, it may be necessary for Kyiv to draft more Ukrainian citizens – though there has not yet been any official announcement.

All Ukrainian soldiers undergo military training before they dispatch to the front lines. Several of Ukraine’s partners have provided training for recruits, including the United States, the United Kingdom, Sweden, Denmark, and Poland. This training started months ago, so Ukrainian soldiers’ military skills are only improving as the war continues. Many newly mobilised Russians, on the other hand, will receive no training at all. The West should increase its intake of Ukrainian soldiers for training to magnify this disparity.

But training alone is not enough. Ukraine needs more weapons to be better able to withstand the pressure of Russia’s mobilisation. The Ukrainian armed forces need the capacity to strike logistics nodes deep behind the front lines – in Russian and occupied Ukrainian territories.

Russia’s military logistics mostly rely on railways, which it uses to deliver troops and equipment to the front lines. Ukraine needs long-range high-precision weapons to destroy railway nodes and military and fuel stockpiles, thereby undermining Russia’s ability to transport its conscripts and equipment. US-made Army Tactical Missile Systems with a 300-km range could be gamechangers in this regard. Ukraine’s Western partners have expressed concern over the use of their weapons to hit targets in Russian territory. But Ukraine has already done so several times, with little significant media or diplomatic reaction from the Russian side. Furthermore, Russia aims to show that it is ready to raise the stakes – so Ukraine needs the capability to respond to such an escalation.

The mobilisation may be large-scale, but Russian conscripts mostly lack the morale, willingness, and skills to fight. The Ukrainian army could use massive artillery strikes to force these soldiers to abandon their front-line posts and retreat. However, the Russian army still has access to much more self-propelled artillery and many more shells than Ukraine’s forces. It will likely send them in massive numbers to support the newly mobilised conscripts. The West should respond by increasing weapons deliveries to Ukraine to help eliminate Russia’s advantage, particularly through the supply of counter-battery radars, and PzH 2000, CAESAR, and M109A6 Paladin self-propelled guns.

Finally, the Ukrainian army needs to improve its manoeuvrability. That is, its ability to disrupt the cohesion of the enemy lines and undermine their morale. Russian units in some front-line areas are demoralised and their supplies are depleted. Ukraine’s army should surround them or push them back – just as it did to liberate the city of Lyman in the Donetsk region. To conduct more attacks and counterattacks like this, Ukrainians need heavy armoured vehicles such as tanks and armoured personnel carriers. Russia will deploy old Soviet armoured vehicles as part of the mobilisation. So, to have an advantage, Ukraine needs modern Western tanks such as American Abrams or the German Leopard 2. Indeed, discussions are under way in Germany regarding the possibility of providing Ukraine with tanks and other types of heavy armoured vehicles.

The Kremlin’s mobilisation should signal to Ukraine and its partners that Russia is playing all its cards, even those that could endanger the stability of the Putin regime. After all, Putin held off mobilising for many months, believing he could conduct a successful military campaign for the TV cameras without any losses. But few Russians are eager to sacrifice their lives for what they perceive as a TV show – as the wave of protests across the country and the exodus of around 200,000 men from Russia attest.

This mobilisation is therefore a sign of the regime’s weakness, not a demonstration of strength. And its main aim may be to discourage the West from further arming Ukraine. The Kremlin is doing this by making nuclear threats and trying to convince Ukraine’s allies that the war will drag on for years, placing their economies under intolerable strain. It is important to see these manipulations for what they are: attempts to scare Europe into making concessions and slowing down its support for Ukraine. But if Putin is successful in this, European leaders will only end up serving his interests and goals. It is crucial that the Ukrainian armed forces can continue their counteroffensive and are prepared for larger numbers of Russian troops arriving at the front line. Ukraine already has sufficient numbers of well-qualified, highly motivated soldiers. These soldiers now need weapons to defend and take back their territories, and win the war.