Reanimation package of reforms > News > Interview > New threats in Donbas: what ideas is the Kremlin pushing forward at negotiations? 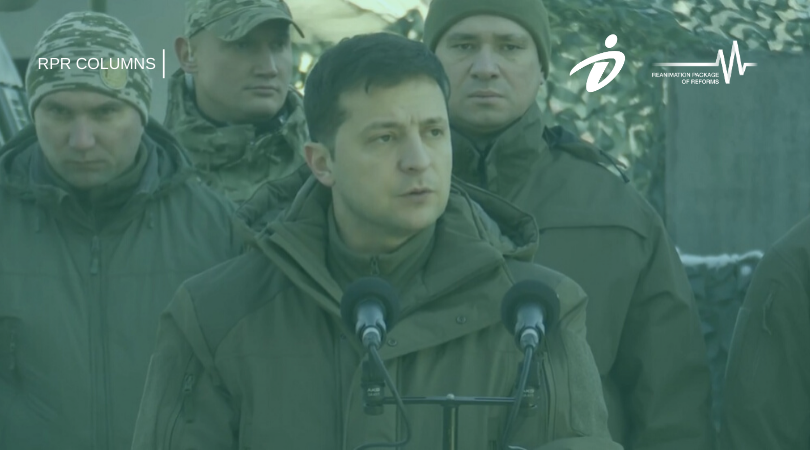 New threats in Donbas: what ideas is the Kremlin pushing forward at negotiations?

The scandal over establishing of the “Consultation Council” in Minsk is not over yet. It nearly led to Kyiv’s indirect recognition of Russia-backed militants in Donbas as direct interlocutors. Meanwhile Russia has come up with another dangerous suggestion for Ukraine.

The Kremlin’s new proposal again suggests changing working procedures within the Minsk group. The first suggestion was stopped by active criticism on the part of civil society in Ukraine as well as by Germany’s disagreement. Berlin realized the possible consequences of establishing the “Consultation Council” and did not agree to take part in it. Who will be able to stop Kremlin’s new idea? Why is it dangerous?

What is happening to Andriy Yermak’s idea on the “Consultation Council”?

The idea to establish the “Consultation Council” is still alive, despite its implementation did not follow the scenario that was initially planned by the Office of the President of Ukraine and by the Kremlin. It was planned that the “Council” will partially start in late March.

Russia is still highly interested in this format. Russians will keep pushing as much as they can so that this format does happen. Due to the criticism inside Ukraine and unreadiness of France and Germany to directly join the initiative, the Ukrainian side had to backtrack or at least slow down.

Moscow realizes that the “Consultation Council” plan does not proceed as they would want to. So, now Russians are suggesting new initiatives.

Last week, when preparing the next video conference of the Trilateral Contact Group and holding discussions with Normandy Four representatives, Russia came up with a vision of rebooting the Minsk format.

They want to formalize the work of the Trilateral Contact Group in Minsk as much as possible and develop procedures. After each sitting minutes should be signed and publicly released. They also want to make documents and decisions approved by the Group, almost mandatory for implementation, turning them into homework for each of the participating parties. This idea changes considerably the work and status of the Trilateral Contact Group. It actually grants powers to the Group that nearly equal those of an international organization. It is likely that the Russian Federation will make it its primary area of pressure.

Why is it dangerous?

Firstly, there will be not just Russia’s signatures but also those of representatives of illegal “authorities” in the occupied areas of Donbas. Most likely, Russia will insist again to have the signatures of “delegated representatives of the defined districts of Donetsk and Luhansk regions”. It may lead to Ukraine indirectly recognizing the so-called “LPR” and “DPR”.

Secondly, Russia wants to “chase” Ukraine into a dead-end of formalities to be able to constantly pick random paragraphs and insist that until Ukraine does not do it, Russia will not be implementing some other commitments. The Trilateral Contact Group in Minsk is rather a platform for political discussions. Its decisions are not legally binding.

Agreements made in Minsk are not international treaties. The Ukrainian side has been justly avoiding references to the Minsk Agreements in its domestic legislation. Decisions approved by the Trilateral Contact Group cannot be binding by default.

Russia stakes on procedures and formalized norms, similarly to its idea with the “Consultation Council”. In fact, neither procedures, nor specific regulations are required for political contacts. While it is exactly what is needed to “legalize ‘LPR’ and ‘DPR’” and make them parties to the negotiations.

Why President Zelenskyi’s team is promoting these dubious decisions?

There are several factors here. Firstly, he is in the trap of his own promises to his voters.

Zelenskyi has been promising to quickly achieve piece, he feels that he has to deliver on it. He keeps setting deadlines for himself that no one demanded of him. This timeframe does not match the actual spin of events in the Normandy format and in the Minsk process.

That’s why he demonstrated himself ready to take up the initiatives that might seem a step forward but actually pull Ukraine back, give up Ukraine’s positions or considerably weaken them. The story of the “Consultation Council” is one of them.

The second factor is erroneous interpretation of social moods. Sociologists claim: the demand for peace that residents of Donetsk and Luhansk regions have, is not as comprehensive and unconditional as the Office of the President of Ukraine understands it. A recent opinion poll conducted by the Ilko Kucheriv Democratic Initiatives Foundation in the government-controlled part of Donetsk and Luhansk regions clearly demonstrated that throughout 2019 not only didn’t negative attitude to large-scale compromises with Russia decrease but it even increased further.

A large share of respondents, especially in Donetsk region, sees no need to agree on peace at any cost.

Moreover, illustrative is the fact that in near-front towns where residents have a positive sentiment towards Russia and its proxies, they still do not want to have reintegration “at any cost and the soonest possible.”