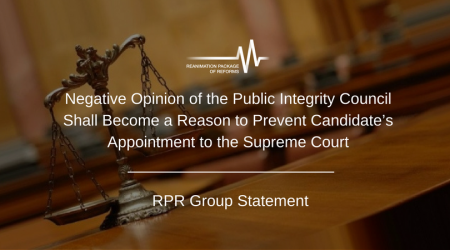 The High Qualification Commission of Judges (HQCJ) has finished its consideration of opinions of the Public Integrity Council (PIC) on candidates’ non-compliance with criteria of integrity and professional ethics. After this, the Commission should compose a final rating list of the candidates to the positions within the new Supreme Court. The civic movement CHESNO, the Reanimation Package of Reforms expert group on judicial reform, Anticorruption Action Center, Avtomaidan, and DeJuRe Foundation call on the HQCJ not to recommend appointing to the Supreme Court the candidates who received negative opinion of the PIC.

The HQCJ has overruled 76 opinions of the PIC, which amounts to 56% of the total. During the interviews and the plenary meetings, the HQCJ supported less than 40% of the opinions. Other candidates have dropped out of the competition voluntarily. In addition to its opinions, the PIC has also provided the HQCJ with well-grounded negative reports about more than 100 candidates. Therefore, there is a huge risk that unscrupulous candidates might become judges of the new Supreme Court.

However, the rules of the candidates’ assessment, defined by the HQCJ itself, require disqualification of a candidate, should at least one case of dishonest behavior has been identified.

There was no unanimity among the Commission during the adoption of most of the decisions on overruling the public veto, which means that the HQCJ members have different opinions about the candidates’ integrity. If at least one member of the Commission doubts that the candidate is decent, we consider it unacceptable to appoint this candidate to the highest position within Ukraine’s judicial system. After all, professional ethics of would-be judges of the new Supreme Court should not raise any doubts.

We call on the High Qualification Commission of Judges to ban from further participation in the competition those candidates who do not comply with the criteria of integrity and professional ethics, in particular, the candidates who:

It is crucial to emphasize that the above-mentioned circumstances should be obligatory for the HQCJ to consider, since they correspond with the indicators and criteria that were determined by law and by the HQCJ decisions concerning the Supreme Court judges’ selection.

We call on the High Qualification Commission of Judges not to allow for the appointment as Supreme Court justices the candidates who received negative PIC opinions based on the revealed and substantiated the above said circumstances.