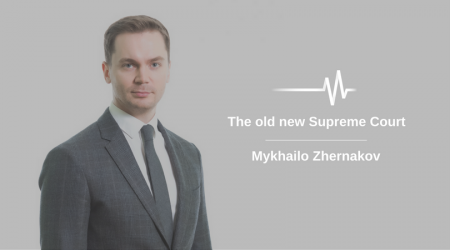 Only a few days remain before the end of the competition for the new Supreme Court, the establishment of which is a cornerstone of judicial reform.

However, despite expectations for a significant improvement, there is every indication that the new Supreme Court will not be fundamentally different from the old one, and the situation in the judiciary may be preserved for the upcoming generation.

The success of any reform depends on three important components: laws, institutions, and people. Legislative regulation has to adequately describe how capable and effective institutions operate, while people should enforce it. Take away any element and no reform will happen. This is well illustrated by today’s events. The National Agency for Corruption Prevention has adequate legislative support, but it turned out to be totally incapable institutionally. The patrol police started well, but now it suffers from the lack of staff and lack of reforms in the remaining structures of the Ministry of Internal Affairs. Not to mention the reforms that never took off, being shelved as draft laws in the Verkhovna Rada. As far as judicial reform is concerned, the situation with the first two components seems satisfactory. Last year amendments to the Constitution and new Laws “On the Judiciary and the Status of Judges” and “On the High Council of Justice” were adopted and entered into force, amendments to the procedural codes are next in line. Institutional structure is improving, too: we are increasing the independence of the judges, moving to a three-tier court system, gradually introducing private enforcement agents and e-court.

Who are the judges?

The component of “people” in the judicial reform was and remains the key. The idea of the court, in fact, involves decision-making by people “based on the law and their own judgement”. Moreover, the discretion of court is the broadest among all government agencies. In these circumstances, not surprisingly, the success of reform depends most of all on the personality of judges. That is why the central part of reform involves the renewal of the judicial staff. In 2015, courts were fully trusted only by 0.7% of the population, and 94% were convinced that corruption in courts is the major problem. Accordingly, it was necessary to replace those who went to the court system to take bribes and implement someone’s political will with those who would judge fairly and impartially. For this purpose, amendments to the Constitution and the new Law “On the Judiciary and the Status of Judges” provided for the establishment of the new Supreme Court on a competitive basis. Both judges of any court and experts from outside the system (lawyers and scholars) could participate in the competition. As a result, there should have appeared the highest court of a completely new quality that fairly decides on cases, as well as forms a stable case law, mandatory and understandable to all. At least, this is the way the judicial reform was described by the President of Ukraine. Unfortunately, in practice, the developments have been different so far.

Selection is performed by the High Qualification Commission of Judges of Ukraine (the HQCJ) – a special body that consists mostly of judges elected by their peers. This is a European standard to which we agreed, even though the research suggest that this approach is ambiguous and even downright dangerous in transitional democracies. The logic is simple: if the reform is aimed at renewing the judicial staff, it is hardly appropriate to entrust it to the body consisting mainly of representatives of the old judicial system. However, in terms of organization, the selection process started well. Competition was announced for 120 positions, and fairly quickly documents from 846 candidates were accepted. Problems arose at the stage of admission to the competition, when the HQCJ refused to admit 45% of scholars and lawyers due to a very peculiar provision of the law and its interpretation. This reduced the number of candidates from outside the system almost by half, while the figure among the sitting judges was only 7%. At the first stage, 653 candidates who were admitted took an exam consisting of two parts – an anonymous test and practical assignment. The results of the evaluation of the tests raised no doubt, however the evaluation of the practical assignment prompted a lot of questions. First of all, the scores given by the HQCJ members for written works contrasted greatly with the expectations of candidates and the professional community, as well as were statistically improbable, giving the reasons to doubt the impartiality of the Commission. Moreover, the day after the publication of minimum points and results of written works, the HQCJ corrected its decision, bringing 43 candidates back to the competition, among them the current Deputy Attorney General Anzhela Stryzhevska and current Deputy Chairman of the Supreme Administrative Court of Ukraine Mykhailo Smokovych. After that, the public addressed the Commission with the requirement to publish the tasks and methodology of evaluation to ensure that there was no falsification. But the demand remained unsatisfied.

In search of integrity

However, the most interesting things are happening now, during the interview and examination of the dossiers of candidates when the integrity of judges and judicial candidates is assessed – a quality which the judicial system lacked all these years the most. For this purpose, the law requires that each judge and candidate for a judicial position should fill in the integrity declaration, while verification of candidates’ compliance with the integrity criteria and professional ethics should be performed by the Public Integrity Council. This official body, established in November 2016, 100% consists of the public representatives (attorneys, lawyers, scholars, human rights activists and journalists). Under the law, it evaluates the candidate, and in case of a negative PIC opinion the HQCJ may agree or disagree with it. As of today, the High Qualification Commission of Judges did not agree with 80% of the negative opinions of the PIC, turning a blind eye to obvious violations. The candidates “vetoed” by the Public Integrity Council but allowed to the next stage by the High Qualification Commission of Judges include judges of Maidan, violators of human rights, and judges who cannot explain the origin of their property. The movement CHESNO within the campaign “CHESNO. Filter the Judiciary!” cites several examples when the HQCJ members were excessively loyal to representatives of the current judiciary who hold administrative positions. The Chairman of the Supreme Court Yaroslav Romaniuk after the adoption of the dictatorial laws of January 16 held a briefing and publicly hailed their adoption. During the interview, Romaniuk admitted that the support of the laws of January 16 was a “mistake”. Mr. Romaniuk also said that it was a mistake on his part to deprive a 97-year-old pensioner of housing and deny her protection of rights for a few years, which is described in detail in the decisions of the European Court of Human Rights recognizing that the actions of the Ukrainian judges were arbitrary and constituted a gross denial of justice. Another person continuing the competition is the Chairman of the District Administrative Court of Kyiv Pavlo Vovk. The latter managed to convince the HQCJ that he did not actually live in undeclared house, although it was in this building that the candidate and his former wife were found during NABU searches in the morning on May 26. It is also curious that during the most interesting moments of the interviews with the Chairman of the District Administrative Court sound miraculously disappeared and activists could not hear all the arguments of the judge concerning his wealth and political connections (the judge used to be Kivalov’s assistant was seen meeting with MP from the BPP Oleksandr Hranovskyi, the “curator” in the prosecutor’s office and courts).

Analysts of the campaign “CHESNO. Filter the Judiciary!” also spotted evidence of bias on the part of the HQCJ in communication with the candidates and members of the Public Integrity Council during 43 interviews. For instance, Commission members tended to “interview” the representatives of the Public Integrity Council much more thoroughly than the candidates. During the interview with the Head of the Council of Judges Valentyna Simonenko this scandalous behavior went beyond the pale: the candidate did not respond to almost any of the questions of the PIC representative, while all the time allocated for questions about integrity was devoted to the “interrogation” of the public representatives by the Commission members. The fate of these and other candidates will be determined in the plenary sessions of the HQCJ that begin on June 6. To overrule the negative opinion of the Public Integrity Council, the HQCJ will need to muster two-thirds, i.e. 11 votes out of 16. However, despite the numerous calls to do this openly, unveiling individual scores given by the Commission members and candidates’ ranking before the plenary session, the HQCJ has already decided to do the opposite. The cherry on the top is that the methodology of evaluation by the Commission members of most of the judicial dossiers and interviews with candidates is unknown, and yet this stage brings the most – 790 points out of 1000 possible. There is a risk that decisions will be taken arbitrarily, without any objective criteria in favor of the “right” candidate. Civil society representatives have repeatedly drawn attention to this, but received no answer. Given that the time to the final interview stage is ticking away, and no methodology is made public, it is difficult to believe any methodology exists at all.

What shall we do?

The best safeguard against corruption is transparency. It is not too late to make a decision ensuring maximum openness and prove the competition objectively to the public. To do this, it is necessary to:

As of today, it is hardly reasonable to expect a perfect Supreme Court. In fact, it is hardly possible at all. But we do not intend to search for the ideal, rather to achieve the best result possible. We will live with this Supreme Court for about 25 years, since after the appointment it will be virtually impossible to dismiss its judges. And on every judge of the court people’s fates will depend, as well as the results of privatization and presidential elections. We have to make a last-gasp effort to achieve the objective completion of this competition.