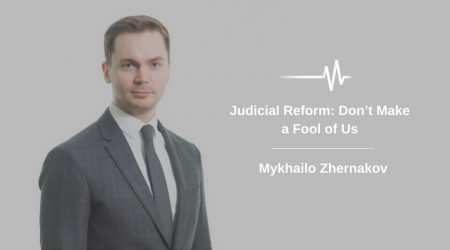 Mykhailo Zhernakov: Judicial Reform: Don’t Make a Fool of Us

We were promised a judicial reform. It was promised by President Poroshenko – the author of laws, by the representatives of the parliamentary coalition who voted for those laws, by the Ministry of Justice.

There has been little progress in the judicial reform. However, until recently the authorities have claimed – both to the public, and to the international community – that establishment of a “brand-new” Supreme Court is a huge victory.

However, the problems with the competition have started right from the start, while “mistakes”, “accidents”, and “defects” have occurred almost at every stage of the competition which lead to a conclusion that this process was merely a subject of manipulation.

It was then that the members of the civil society started to draw attention to the problems and to suggest solutions.

Unfortunately, this had almost no effect on the High Qualification Commission of Judges. Instead of taking into account the requirements and correcting mistakes, they began to explain “why everything is good even in such a form” in the best traditions of information warfare – shifting accents, manipulating, or sometimes even trying to convince us that black is white.

Today, at the last stage of the selection process, it is critically important to soberly assess the state of things and to realize the scale of problems, before it is too late to fix them. Let’s analyze the main claims.

1. “The outcomes of the competition can be criticized only once the final results come out.”

When the final results come out, it will be too late to criticize. We select this composition of the court for the next 25 years, no less. Unlike the President and the Verkhovna Rada, which can be re-elected, judges are appointed for an indefinite term, and it will be virtually impossible to dismiss them.

At the same time, the following incidents have already happened during the selection:

– Almost half of the candidates from outside the system have not been allowed to run for offices;

– The HQCJ did not comply with the legal requirements regarding the transparency of the competition, in particular, the openness of the judicial dossiers;

– The highest scores for the practical task were given to the judges associated with incumbent or former politicians;

– The result of the score distribution has turned out statistically improbable, which indicates a possible manipulation;

– In 43 interviews, the facts of bias against candidates and members of the Public Integrity Council on the part of the Commission have been identified;

– The HQCJ disagreed with 82% of the negative opinions of the Public Integrity Council, having allowed 115 candidates with poor professional integrity and ethics to move to the next stage of the competition.

Are these not sufficient grounds for concern?

2. “The judicial reform can already be considered successful.”

This statement has been made by the “communication expert” Olena Pryvalova in her recent column. The author justifies her claim by the fact that the very existence of such a competition is an incredible victory. She also claims that all problems stem from inadequate communication between the HQCJ and the public, whose representatives she calls “mummers.” However, the expert forgets to add that it is in the HQCJ that she deals with communications.

It is difficult to understand why the communication expert at the HQCJ uses abusive language and publicly blames others for the lack of communication and constructivism, instead of building up communications (which is her direct responsibility). At that time, “specialized” trolls have already appeared on Facebook, commenting on the competition for the Supreme Court offices in a similar message-box.

The question of how successful is the reform which has already caused so many issues (see para. 1) is rhetorical.

3. “The competition has a level of transparency unprecedented both in Europe and around the world.”

It’s true. But it is worth keeping two things in mind.

First, this level of transparency (online broadcasts, public participation, open dossiers, etc.) exists because most of these things have been successfully advocated by the civil society. Moreover, only in response to numerous public demands, the HQCJ has finally implemented the law.

Second, “unprecedented” does not mean “sufficient.” Let us not forget that the level of corruption and distrust to the judiciary in Ukraine are also unprecedented. Both before and after the scandals with the assessment of practical tasks, the public has repeatedly demanded that those tasks and individual assessments are published. Later, the Public Integrity Council and other representatives of the civil society demanded that the candidates’ ranking, as well as individual scores and votes of each member of the Commission for overruling the opinions of the Public Integrity Council, should be disclosed in advance.

The Commission declined almost all the demands.

4. “The members of the HQJC are highly qualified; there are no complaints against them. The Commission members are responsible for their decisions.”

Apart from the Chairman of the Commission, professor Serhiy Koziakov, with whom the HQCJ is usually associated, as well as two newly appointed young members, the Commission includes another 13 people, the vast majority of whom are judges elected by judges. It is obvious that with such a composition the Commission is in no hurry to vote against sitting judges in the competition. This is logical, as any person in an elective office fulfills voters’ will to this or that extent.

However, another thing is of interest. The project “PROSUD” has recently published a survey “Who judges the judges?” regarding some of the Commission members. It turns out that the HQCJ members have also violated the rights to peaceful assembly, do not always declare their property or, on the contrary, declare a lot of valuable assets. The Public Integrity Council has already called on those members of the HQCJ to refuse to accept similar cases regarding the Supreme Court candidates, as required by law. Soon we will see whether the Commission members will follow this recommendation.

The responsibility of the HQCJ members is a myth. Despite the fact that almost every one of them is paid 225,000 UAH a month, the law does not establish any mechanisms of their responsibility for the adopted decisions. Moreover, the Commission did not dare to assume even the minimum of responsibility for overruling the conclusions of the Public Integrity Council, having decided to vote anonymously behind closed doors.

5. “Individual scores and results of voting cannot be published, according to the law. The European standards do not provide for this either.”

It is a myth, too. The law states that the decision of the Commission in plenary composition is adopted in the absence of the person on whose account the decision is made or of other persons. Nothing is said about the publication or disclosure. The Opinion of the Consultative Council of European Judges No.17 is applied to the evaluation of sitting judges and does not cover the issue of the first appointment.

The claim “what if my house is burnt down”, sometimes voiced by the Commission members, also sounds quite strange. Applying for the office of a HQCJ member, everyone should be aware of the risks, and 255 thousand UAH per month paid out of our taxes to each HQCJ member is a good compensation for this. In addition, in the event of a physical threat to property or health, the government can provide additional security.

Soldiers at the frontlines receive much lower salaries, bearing, at the same time, much higher risks. Yet, no one complains too much. Those fight against internal enemies – corruption and impunity – could also show at least some endurance and self-sacrifice.

6. “The Public Integrity Council does not adopt all the negative opinions unanimously and, therefore, has some doubts. The conclusions are built on assumptions.”

Such a claim has been voiced during a recent press conference by the head of the HQCJ Serhiy Koziakov. Such logic is questionable, to say the list. Does that mean, by the same logic, that it is possible not to obey the law, if 226 MPs voted for it, instead of 450? Does this mean that the HQCJ decision can raise doubts if it is adopted by three votes out of four members of the panel, or even 11 out of 16 in the plenary composition?

Despite the fact that the law allows the Public Integrity Council to adopt decisions within panels of 5, PIC has deliberately decided to have all the opinions approved by in its plenary composition. All the opinions are approved by a majority of votes; they are individual, and public protocols are available online. Even the meetings and discussions on the mater are open to anyone. We have demanded a much lower transparency standard from the HQCJ. In vain.

Most importantly, the majority of opinions contain indisputable facts. These are false statements in property and integrity declarations, violation of human rights established by the European Court of Human Rights, the ban on peaceful assemblies imposed by the judges and others. The HQCJ should respond to them, yet in most cases it does not. Also, the Integrity council is not a court and does not establish facts on its own, therefore there is reasonable doubt. For example, the PIC assumes that a candidate cannot afford to purchase nine apartments, three houses, four plots of land, and two cars with the judge’s salary only. Yet, even this logic does not convince the HQCJ.

7. “The Commission shall appoint 120 judges of the Supreme Court, since it is required by law. However, there are no candidates to choose from.”

This is also not true. The law requires that at least 65 judges should be appointed. Competition has been called to fill 120 offices, but it is possible to recommend appointing fewer. The main thing is that there should be no doubts about integrity, since professional integrity of a judge is a requirement of the Constitution. The members of the Commission themselves used to say that it is better to appoint fewer judges now, and take into account all the mistakes for the second stage of the competition.

If several people are applying for a position in a commercial company and none of them fits the requirements, a new competition is called. And to select 120 judges of the Supreme Court for the next 25 years is not the same as to hire an office manager.

The HQCJ has recently announced that it has no complaints regarding the professional integrity of 62.7% of the candidates. It is 266 candidates. Of these, one sure can select 65 people without severe doubts about integrity or reputation. Otherwise, the whole idea of ​​the competition for the Supreme Court, and the judicial reform in general will be completely discredited. This was recently stated by the EU Ambassador. The ambassadors of other countries have made similar claims. It’s a pity that we still need a voice from outside to understand the obvious.

At this very minute, the High Qualification Commission of Judges is launching plenary sessions to overrule the opinions of the Public Integrity Council. Their results will determine who will shape the future of the next generation. You can watch the broadcast here.